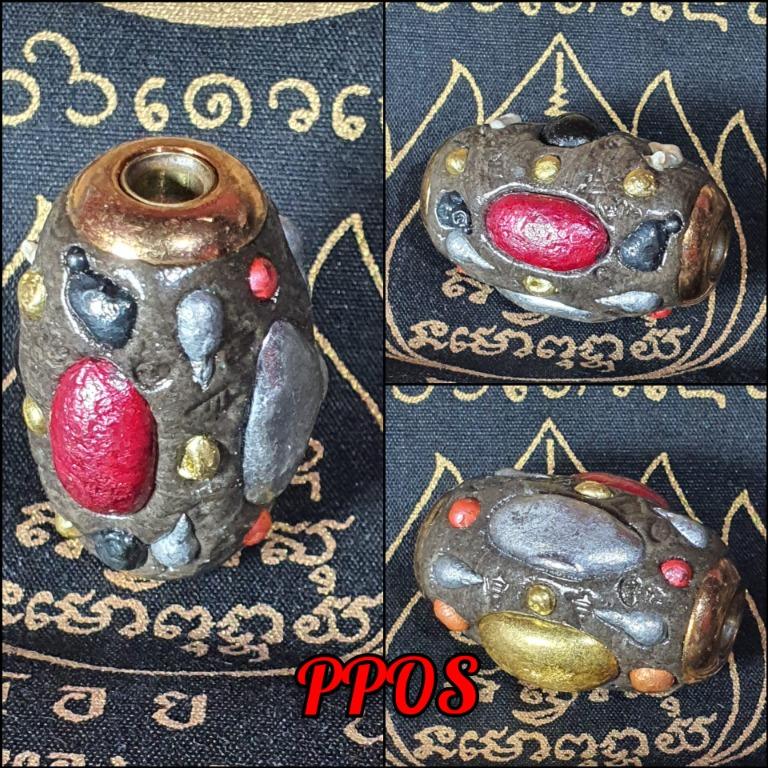 LekLai Lovers, this is a must have in your collection!

There are many videos online of people “testing” the power of Leklai by holding it and pouring acid on their hand, burning with fire or using a sharp knife but the holder could not be harmed.

Some of the most famous videos are by LP Yai testing this Leklai on his devotees.

This is what we have managed to obtain, directly from LP Yai!

We have a few video of LP Yai testing the power of this Leklai but we are not allowed to publish.

However, there are many videos of testing video on YouTube of this Leklai.

You can search for it 🙂

For those who dont know what Leklai is, Leklai is a type of mysterious sacred substance which is known throughout Thai history with many legendary tales of miracles and power.

Leklai has always been a wide spread occult phenomenon in recent years due to easy access to media, but Leklai has been dated back hundreds if not thousands of years.

Typically found in certain caves and mountains, Leklai comes in many forms, shapes and sizes.

Every Leklai is believed to be protected by a Deva or a type of guardian.

Every piece of a Leklai has a Deva housed in it.

This particular Takrut Phalang Lokkathat is made purely from the Leklai that LP Yai has obtained personally in the Tham Nam Cave somewhere in Nakhon Pathom province.

The tricky part is, Leklai can only appear after prayers and offerings are done to appease the Deva of the cave.

This particular batch of Leklai were obtained prior to a grand ceremony held at the cave with prayers done by LP Yai for the Leklai to appear.

After hours of intense prayers, the Leklai finally appeared in various shapes.

After collecting those Leklai, LP Yai created a takrut that was made using 59 holy ingredients, other minerals and powder from magical plants and woods.

LP Yai then embedded the Leklai into the takrut.

According to LP Yai, the properties / benefits of wearing this Leklai as follows

1. Protective Power of LP Yai’s Leklei: being invulnerable from physical harm caused by sharp weapon, fire, acid, venom or anything that could cause danger to the wearer’s life.

There are many videos online to prove this theory. We also have a few video of LP Yai testing the power of this particular Leklai that we are selling using fire but we are not allowed to publish it.

We will only show our customers directly at our shop.

1a. Leklai is also known to attack evil spirits / beings and block off black magic then sending it back to its origin.

This is one of the most popular theory of owning a Leklai which has been proven success throughout history.

It is believed that the Deva of the Leklai will protect the owner and if there is any evil spirit that tries to harm the wearer, the Leklai will automatically destroy them. That is why most Mitmors or Exorcism items are made from Leklai.

2. Metta Maha Niyom: receiving mercy and kindness from people. The wearer will possess immense charm to melt the heart of others.

This will greatly benefit the wearer in terms of career, business, sales and even interpersonal relationship at work or social.

3. Wealth: attracting money, supporting business , windfall etc. Owners of powerful Leklais are always known to be very wealthy and well to do throughout Thai history.

Due to the positive vibes and energy of the Leklai, it can also help the wearer attract wealth and positivist everywhere.

4. Health Benefits of wearing a Leklai as stated by LP Yai himself: It is that one will be immune against disease, increase in physical energy, send good positive vibes throughout the body, balance the body and mind, make the body system work effectively, helps with blood circulation, reinforce muscle and tendons, help with absorbing water, protect brain from being damage by radiation, reduce muscle pain or inflammation, help protect or fight against cancer or bacteria, cure paralysis, reinforce mind power and reduce depression.

Please note that these results will happen only of the wearer does good and have a good heart.

If a person is full of negativity and ill intention towards others, the Deva of the Leklai will not help the wearer but instead, leave the wearer.

The power of the amulet will decline if one intends to use it for bad purpose.

Through his deep cultivation and magical knowledge he can fetch Leklai.

To obtain Leklai is not easy, the person must have magical powers to invite Leklai otherwise no matter how hard one tries to cut it, he will only get nothing or may fall into danger.

LP Yai is a good monk who uses his magical competence to help people.

Boon Keng MRT Exit B, Once u come out the MRT Escalator turn back, behind the MRT Toilet you can see Blk 34, the first shop you will see is a Boon Tong Kee restaurant, just follow the long corridor and walk down u will see our shop as we after in the middle.

**The following information associated with this Amulet/Khodamic Item/Product was obtained through translation, reproduction and expresses the Religious beliefs and Opinions of the
Maker/Master/Holyman and Devotees and Or Followers and we have presented the information as it is direct from the Source.