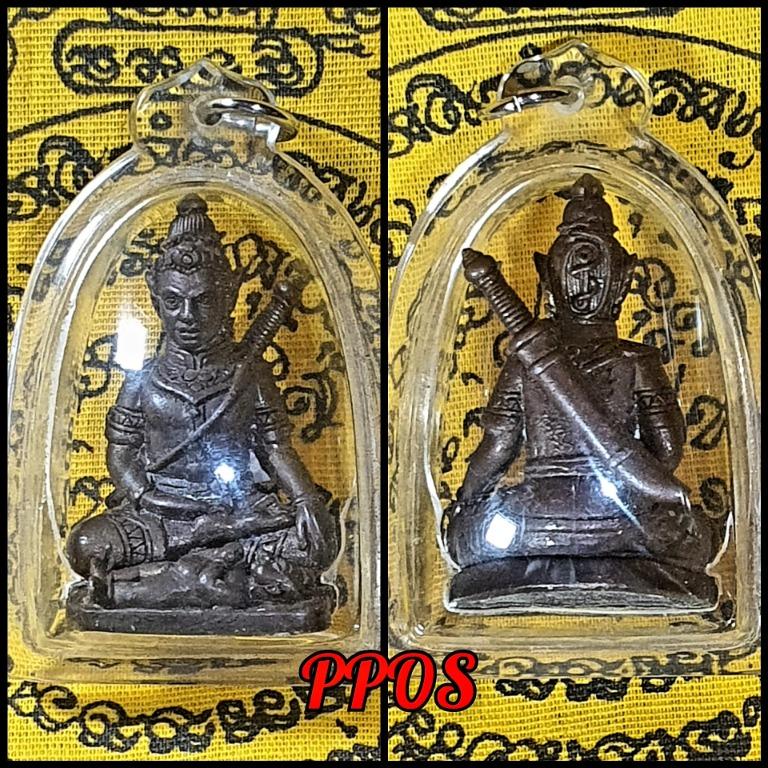 Legend of Khun Paen – The Warlord

“Courage creates a Hero, Destroyed by Passion, Through magic he becomes a legend”

He is the legendary Ayuthaya warrior living some 450 years ago.

His name later became the name of a kind of votive tablets found at Wat Bankrang, Suphanburi Province, about a century ago.

Khun paen was born in Suphanburi Province (some 70 km. northwest of Bangkok) but grew up in the close bordered Kanchanaburi Province, where the world wide well-known “Bridge over River Kwai” situated.

He was a disciple of Archan Kong, a magic-expert guru monk, for magical studies.

By his skillful fighting, he was appointed by the king to be Khun or a high ranking military officer.

His biography was far more extended and rather a story by poetic authors of the early Rattanakosin period.

The legendary hero was born in the central north district Suphanburi in a small village known as Baarn Krang during the era of Ayutthaya in B.E.2173 (A.D.1630).

He is the Great General with enormous ability whom there is none comparable to him up to this date.

There are many Khun Paen amulets bearing his image mostly depicting him in meditation posture seated on a lotus throne covered by a rooftop and embroided pillar on each sides.

Some images may also depict a Guman Thong ‘baby ghost being’ sleeping beneath him and his wives on each sides.

From stories told, one of his beautiful wife Nang Buakhi died while pregnant.

Using his magical science knowledge in activating and controlling spirits, Khun Paen chanted for full 49 days and performed sacred rituals to make Guman Thong so that he could command the spirit to do anything for him.

Which Guman Thong to assist him in many of his pursuits in the battlefield, he won battle after battle and became famous more than ever.

Khun Paen died at the age of 75 in B.E.2249 (A.D.1705). After his death, his secrets with the Guman Thong and other spiritual occult sciences were revealed.

In later years, a temple in Suphanburi known as Wat Baarn Krang was built in memory of the Great General Khun Paen and his faithful Guman Thong by the King of Suphanburi.

It is a common belief that Khun Paen votive tablets are associated with love and opposite sex attraction.

It is all in the mind.

Old Phra Khun Paen amulets from Wat Baarn Krang are the most sought-after.

But if any Khun Paen votive tablet whether new or old could display some of the properties listed below, it is definitely a great collection no matter from which temple it may come from.

– Harm proof against any type of deadly weapons or “Kong Krapan”

– Ability to attract the opposite sex naturally or “Maha Saneh”

– Get to be liked, trusted, respected and admired by everyone

– Get to develop indestructible confidence and courage

– Easier to ask for favor and help

– Gain the ?upper hand? in business or career

– Successful in everything that your do

– Victories in all aspects of life

The properties of every Phra Khun Paen amulets will depend on the creator either it’s for Protection, Metta Mahaniyom, Great Charisma or Maha Saneh.

Khun Paen did not produce amulets during his lifetime until his death in AD 1529.

During the early Rattanakonsin period many authors and poets described his life story in many versions.

That is the time when books, lyrics and poems of the legendary Khun Paen in Thai literature began.

After the finding of Phra Khun Paen amulets in the old Kru of Suphanburi just a century ago, the influence and fame of Khun Paen amulets spread all over Thailand and his legend continues till today as part of Thai literature.

From historical account Khun Paen votive tablets from Wat Baarn Krang was first made and most prized by every collectors.

One may associate the making of powerful Khun Paen amulets and Takrut to great masters from the past and present whom followed the ancient texts in making these highly sought after holy objects.

Of course there are also other famous ancient temples in Suphanburi and Ayutthaya that produces great Khun Paen talismans.

Block 34 Whampoa West #01-33 (330034)
Boon Keng MRT Exit B,
Once u come out the MRT Escalator turn back, behind the MRT Toilet you can see Blk 34, the first shop you will see is a Boon Tong Kee restaurant, just follow the long corridor and walk down u will see our shop as we after in the middle.

**The following information associated with this Amulet/Khodamic Item/Product was obtained through translation, reproduction and expresses the Religious beliefs and Opinions of the Maker/Master/Holyman and Devotees and Or Followers and we have presented the information as it is direct from the Source.
We are not responsible for any claims arising out of the sharing of these information and its use