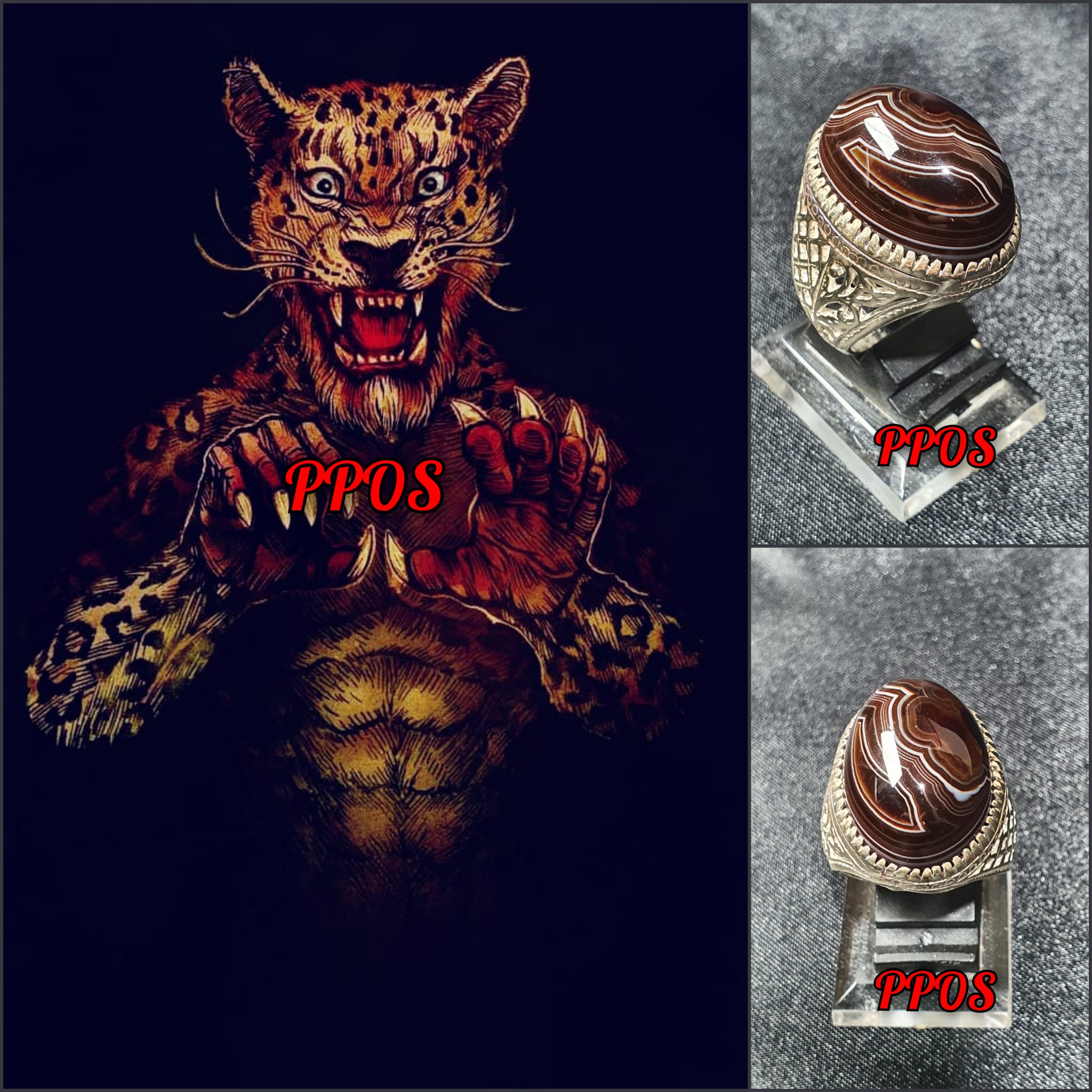 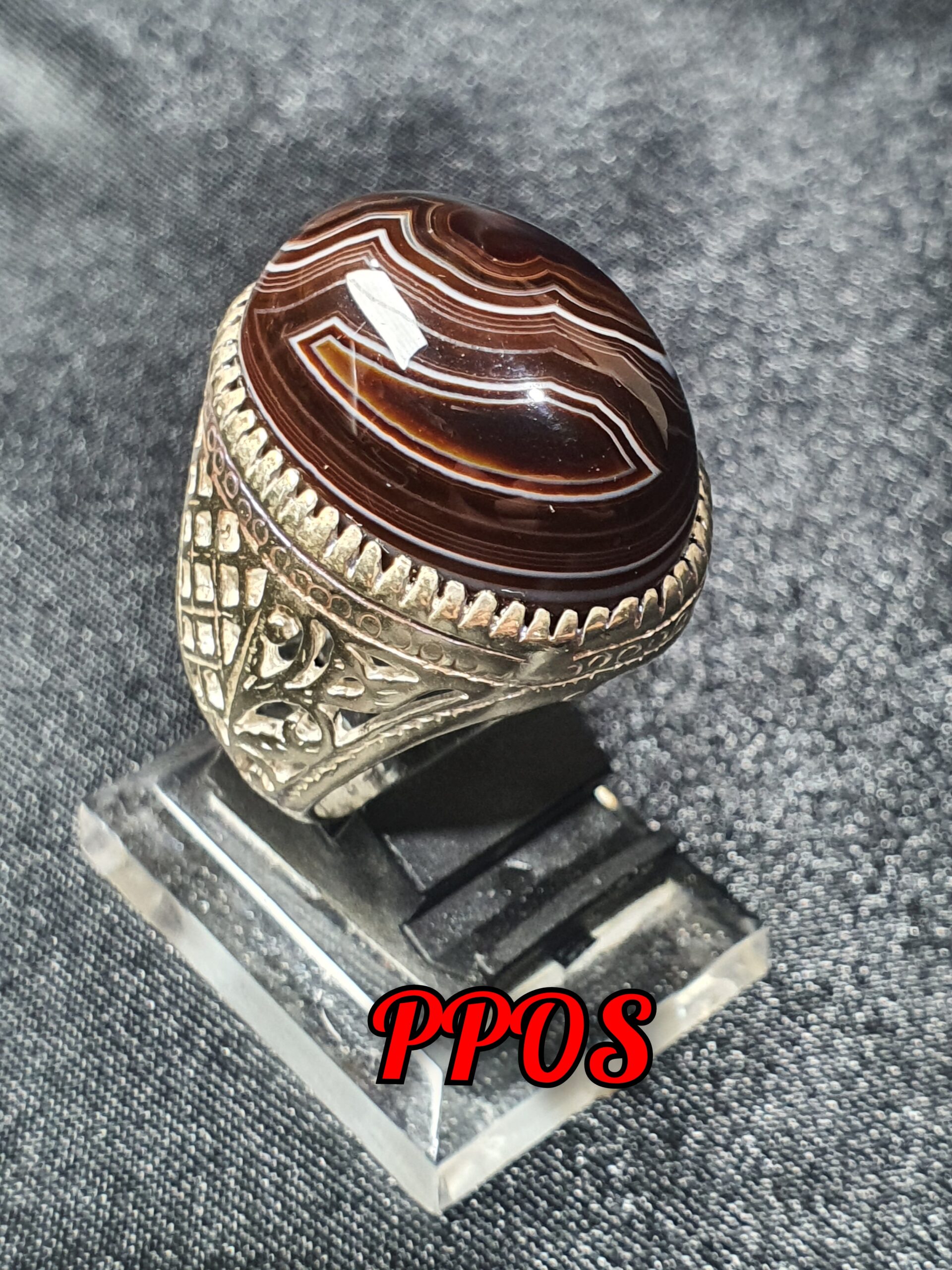 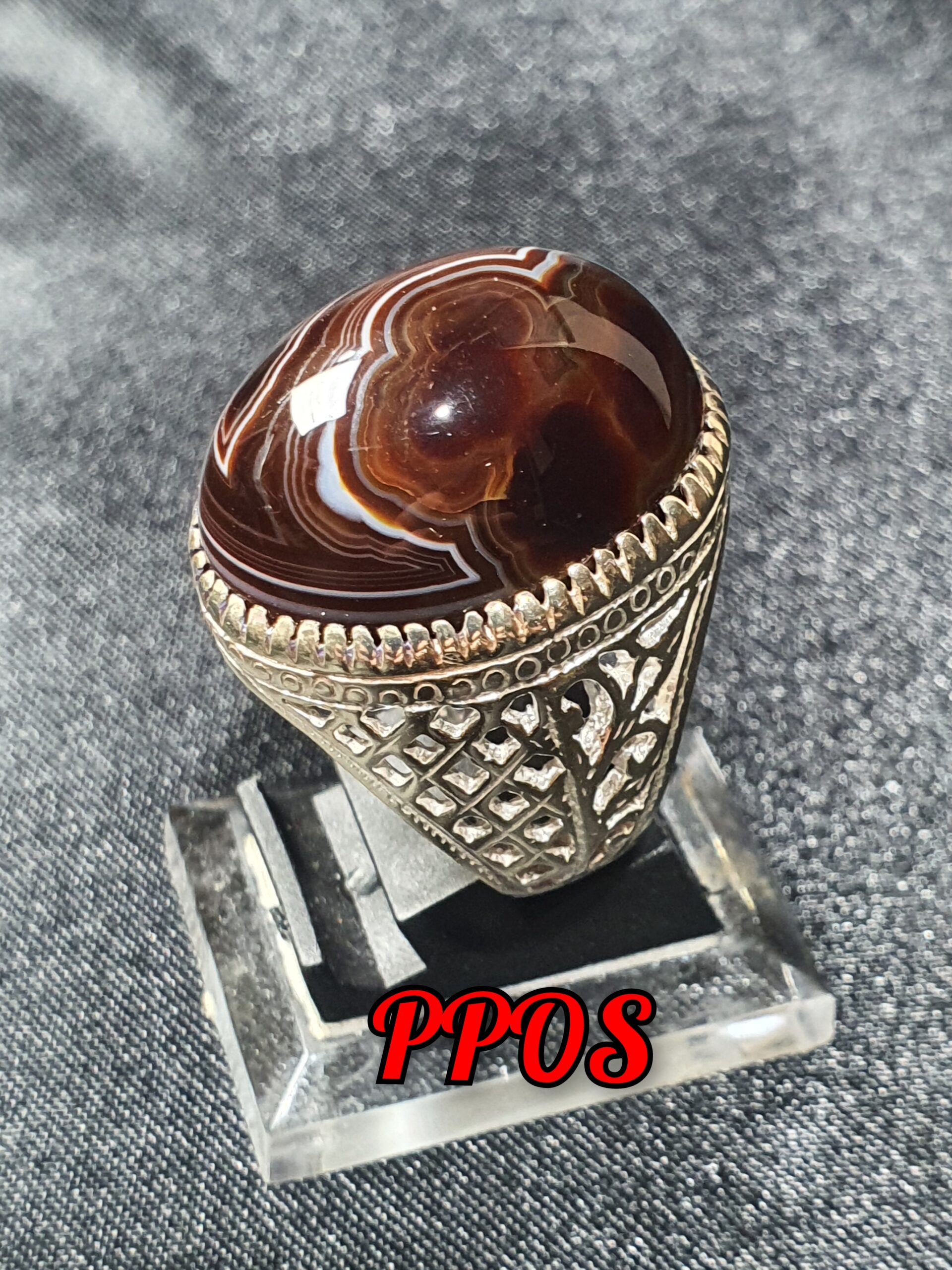 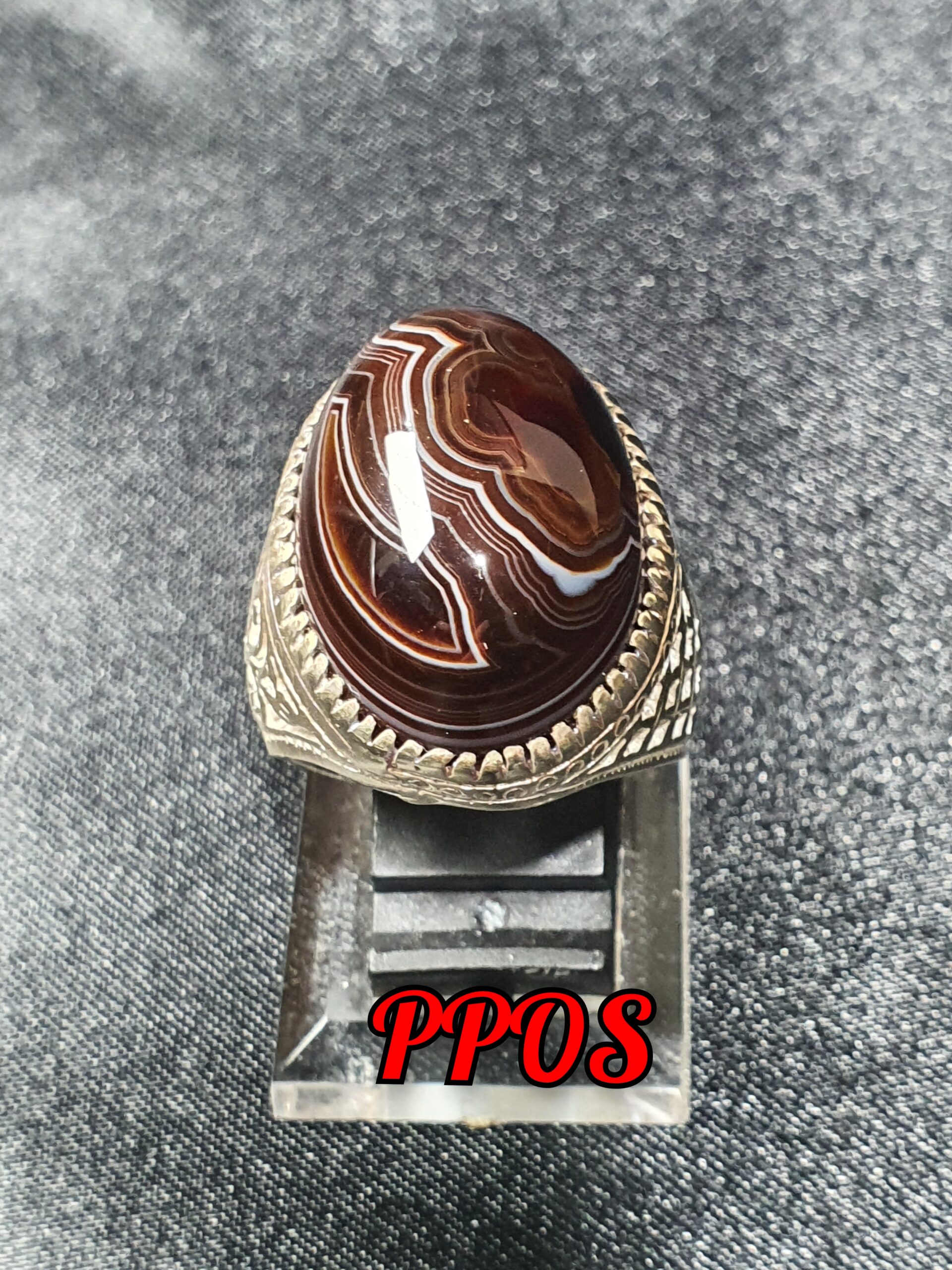 After a long time’s wait, I take great pleasure in finally presenting to you today, What is believed to be an extraordinarily Powerful Leopard Khodamic Jinn from the Goolhim Hybrid Clan of Jinnats.

I shall call him Badshah Al Kabir or the Great Lord.

The Leopard Khodam is a very elusive and rare Khodamic Entity to come by and we may glimpse one every 6 months to a year at times.

This round to obtain this Gem of a Khodam entailed us to procure more than 100 Khodamic Rings before we finally had a chance to get the Leopard Khodamic Ring.

The Vessel of Choice is a 40 Carats Striped Suleimani Aqeeq Cabochon Gemstone. This Gemstone had been set into a handcrafted 92.5 silver ring with the Greatest of Care. Our Craftsman took a week to detail , polish and complete this ring from start to finish.

Though this a solid ring to wear yet it feels so natural, and does not feel out of place at all.

The Suleimani Aqeeq is much prized in some cultures where it is considered a great natural talisman against Black Magic, Accidents, Protection against injuries from Guns, Bladed Weapons and the Like. It is also said to Repel Negative Entities and malicious spirits. We agree with such theories where it pertains to a matter of belief. There must be a reason for such stories to perpetuate and take hold.

Now let me explain abit more about this Khodam.

Badshah Al Kabir, the Great Leopard Khodam is believed to be extremely Loyal and obedient to his Master.

He is known to take a Were Form that is to take the shape of a Leopard with Human Features and Gait, ie, he is believed to walk on two legs, be able to speak with Human Speech and converse with the Master via spiritual communication and dreams.

He is believed to immediately form an unbreakable Supernatural fencing around his owner the moment his Khodamic Ring is put onto the Finger to protect against and dispell any form of Black magic, Witchcraft, Hypnotism magic and other types of charms and Talismans meant to confuse his Master. Such Charms and Talismans are commonly used by many people in today’s time to get an unfair advantage over others to get ahead in life.

To try this out, We have requested a few people to try on this Khodamic Ring and asked them what they felt. Without fail each and every customer who tried on the Khodamic Ring of reported suddenly feeling a sense of greater awareness about their surroundings, a feeling of having much clearer thoughts , being more clear headed, some even went on to say like they felt they could hear and see much better with greater visual and audio acquity. Without fail all those who wore the Khodamic Ring of Badshah Al Kabir , the Great Lorpard Khodam agreed that their senses seems enhanced, their thoughts much cleared and they suddenly seemed more robust and possessed greater energy than before.

At the time, we didn’t reveal the nature of this Khodam preferring to wait until we had a good write up ready so as to do justice to the Great Leopard Khodam.

All are welcome to come and try on this Khodamic Ring and feel for themselves.

The Nature of of Badshah Al Kabir the Great Leopard Khodam can be described in two words.

This is a Ferocious Khodam, make no mistake about it, he is believed to prove to be a bloodthirsty Beast if crossed the wrong way and the only way to offend this Khodam is to try and harm, hurt or otherwise cause distress to his Owner and the Owners Family.

It is believed that if the Owner sheds a single drop of tear if front of Badshah Al Kabir then the person’s responsible for it will pay a very heavy and terrible price.

The Badshah Al Kabir, the Great Leopard Khodam is always with his Owner 24/7.

It is believed that even one’s shadow may leave you but not Badshah Al Kabir, he will stick to you. It is believed at night one may observe 2 shadows when the Owner of this Khodamic Ring is Walking. One will be his or her own natural shadow while the other will be The Shadow of the Great Leopard Khodam.

* During sleep or meditation, the Great Leopard Khodam is believed to be seen standing by your bed or infront of you in a protective pose with paws outstretched to block, defend and attack. This is e pose of which we have selected to post as his Khodamic Picture.

He is Believed to bestow the owner with Greater Power, Physical Strength, Commanding Presense and Aura and Extraordinary Courage.

According to spiritual communication, Badshah Al Kabir is believed to be a very Mature and Ancient Warrior like Leopard Jinn who has existed for Eons.

Badshah is believed to provide a very powerful Aura of Authority and Charisma to his Owner. The Adage, though your enemies may hate you, they will have to respect you is known to ring true here.

Badshah Al Kabir is believed to follow his owner everywhere unless told otherwise.

It is believed that Badshah Al Kabir the Loepard Jinn is Capable of taking revenge on his owner’s enemies, especially those who hurt or harm the owner and his family. So the Owner must be careful whom he or she gets angry and upset at.

At times, in Dark Places the owner is known to feel Badshah Al Kabir the Great Leopard following Right beside him or her to ensure, other wandering spirits do not disturb the owner. So the prospective Owner mustn’t be alarmed by this.

Badshah Al Kabir the Leopard Jinn also may be kept at home, in the Office or Shop for Security and Safety purposes, Prosperity, Financial Comforts and Wealth.

If you want to have just 1 Protector Khodam who will not back down from a fight, who is gonna win for you , defend and protect you at all costs. Even at the price of their own life then this Khodam is for you. You can go wrong. I highly recommend this.

FIERCESOME, FEROCIOUS and EXTREMELY LOYAL TO HIS MASTER AND THEIR FAMILY.

There is so much more that this Khodamic Ring is capable of, I will let that be known by the Owner directly.

Let’s see who gets this.

This Write up is COPYRIGHTED by Phra Pirab Occult Specialist Pte Ltd on 21st September 2022 at 11:16am