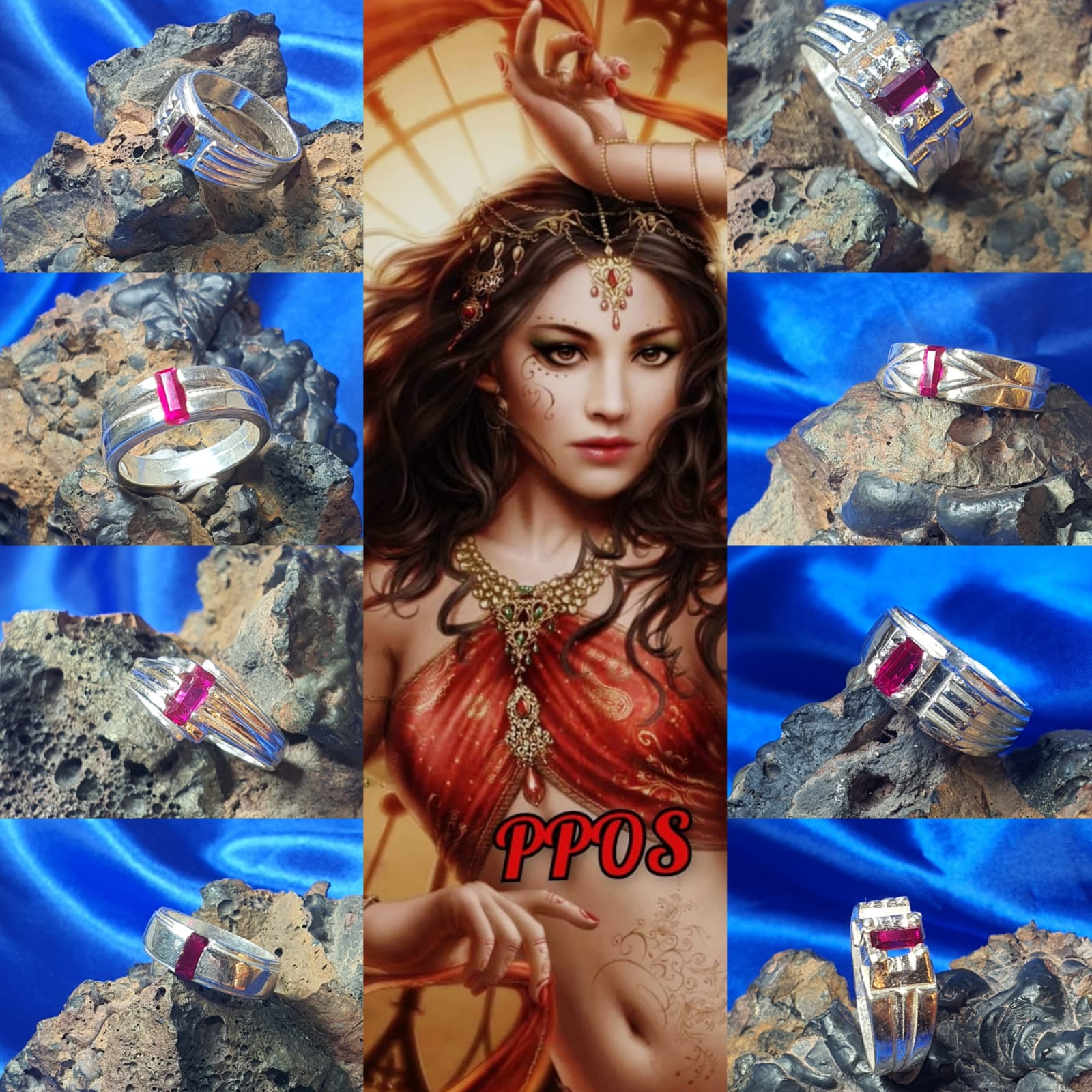 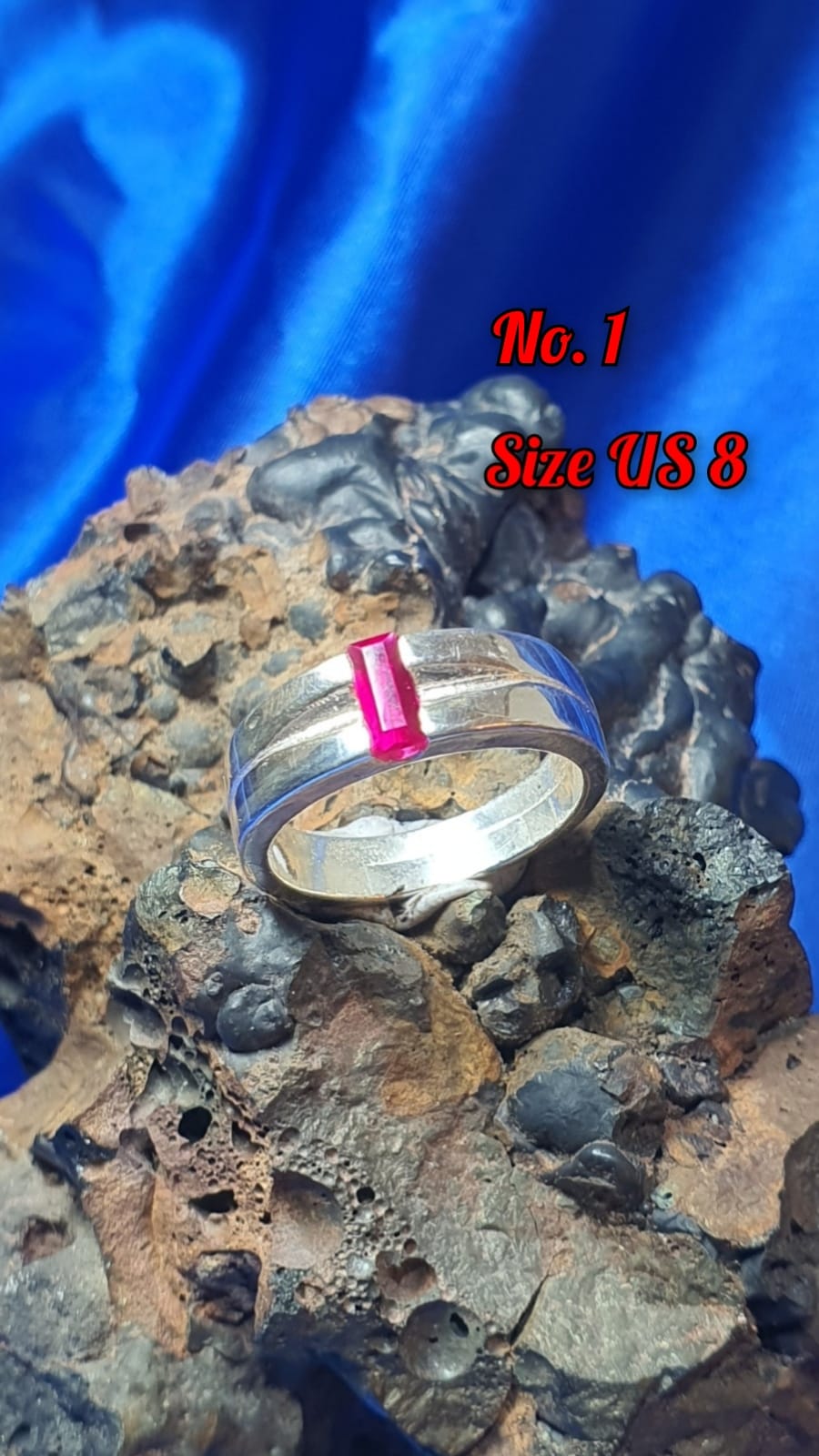 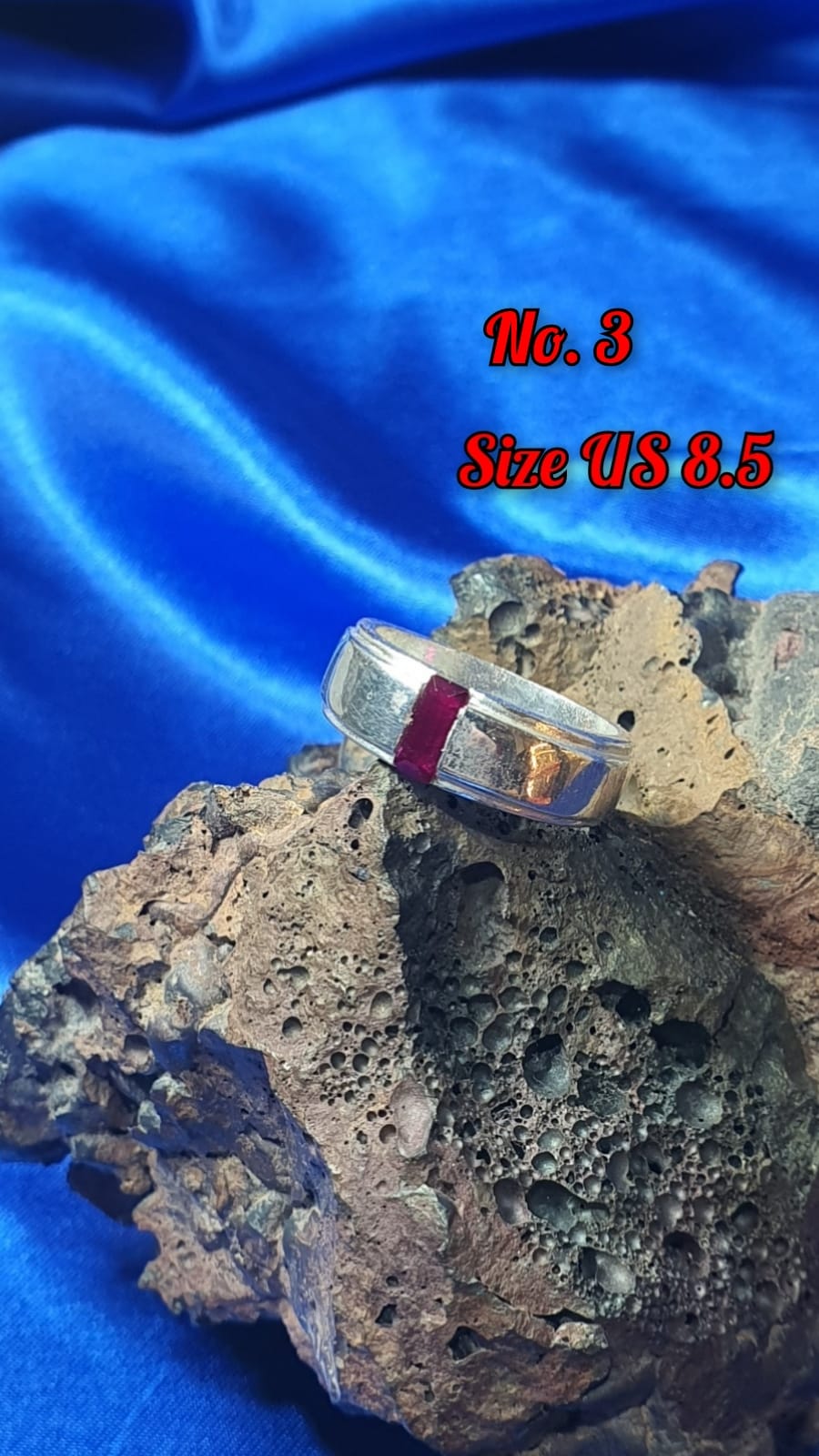 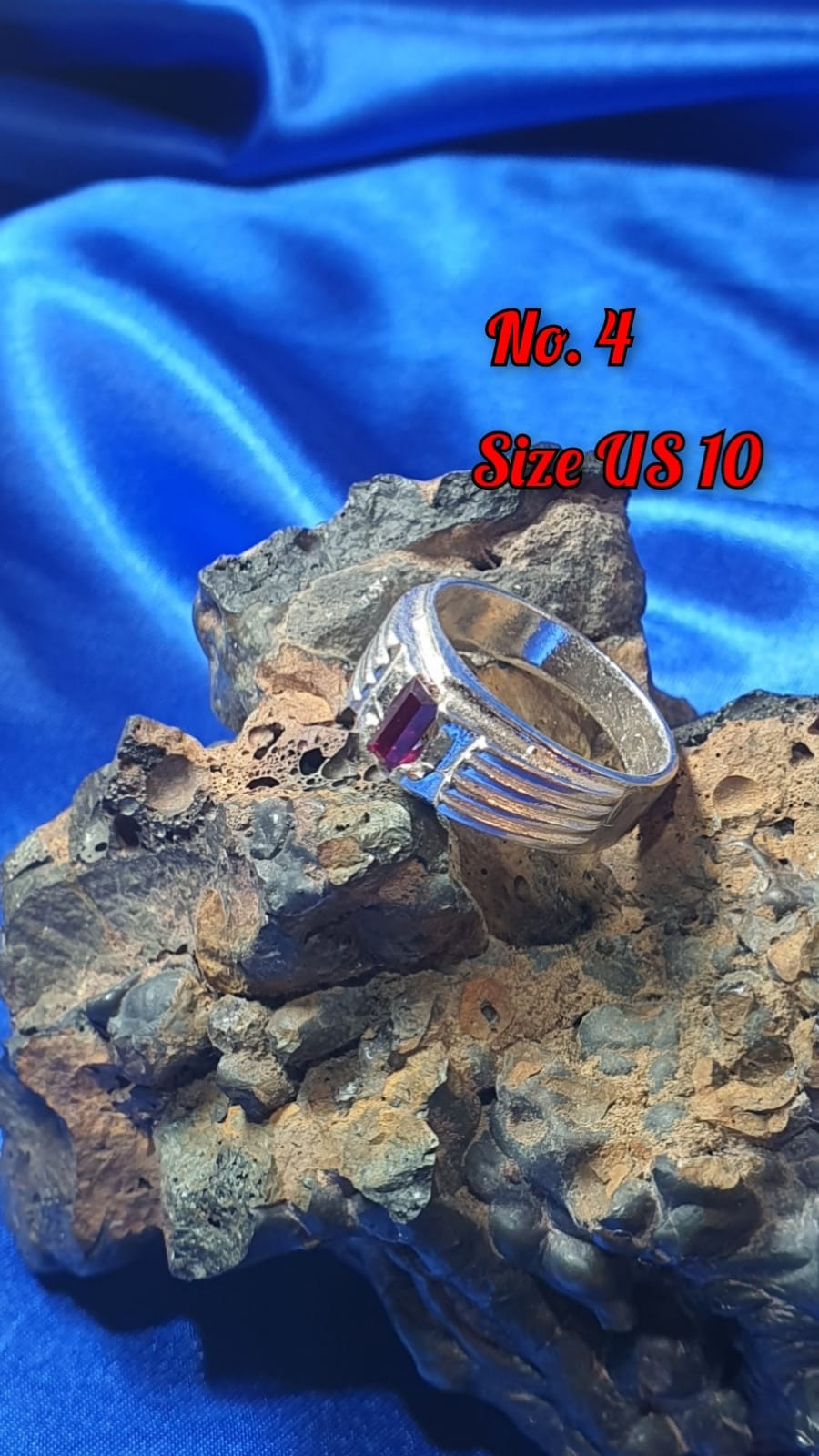 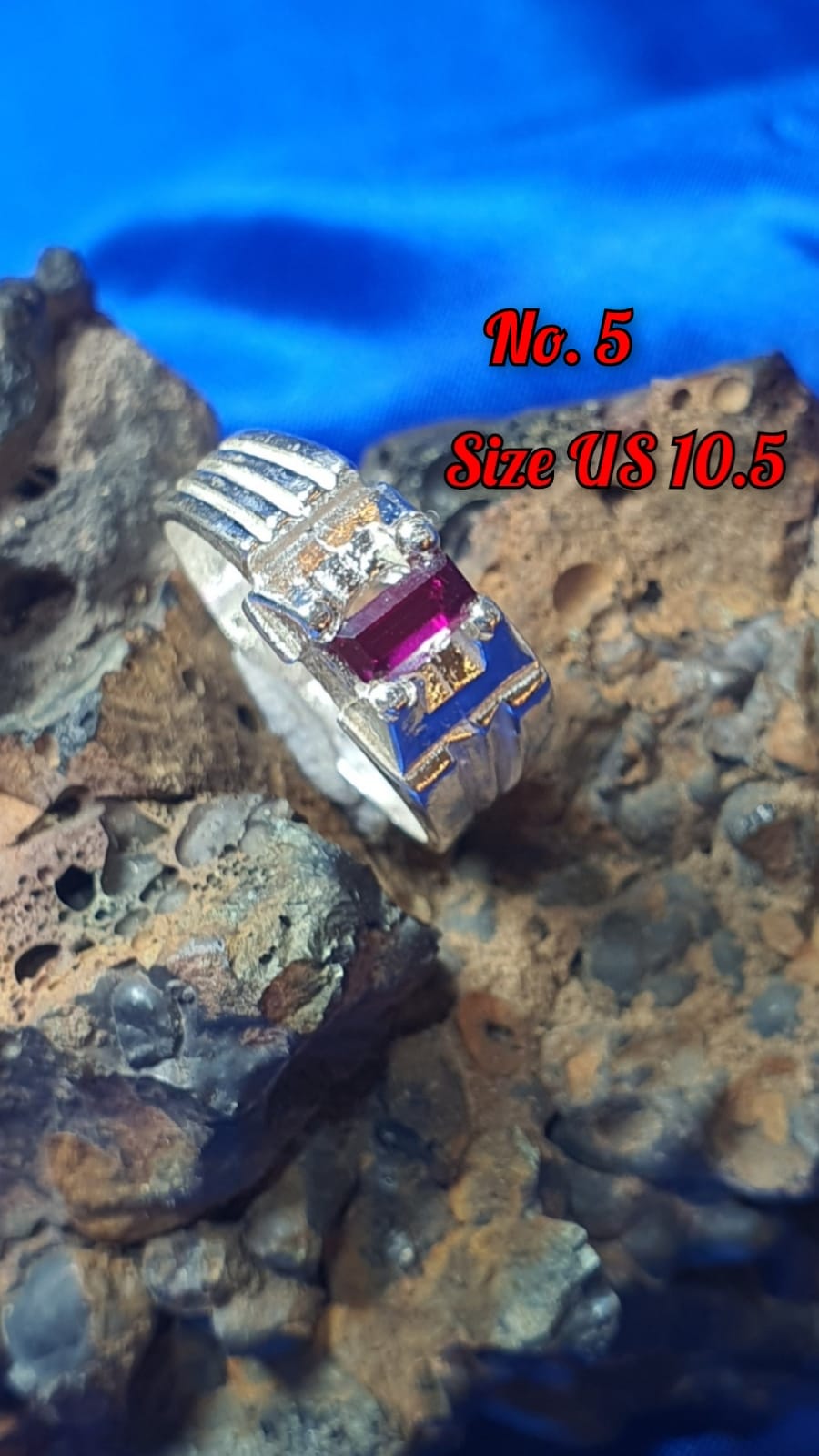 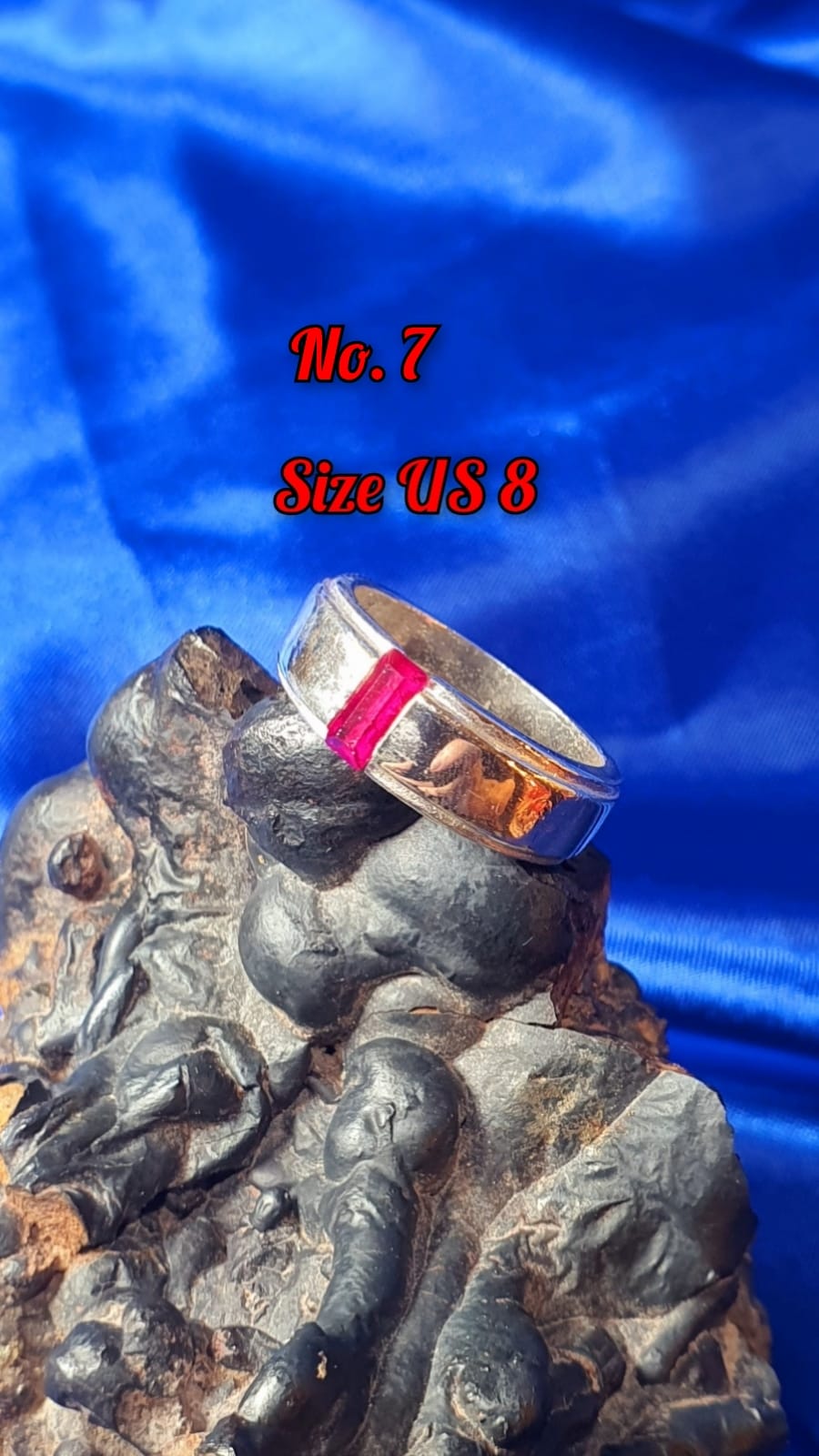 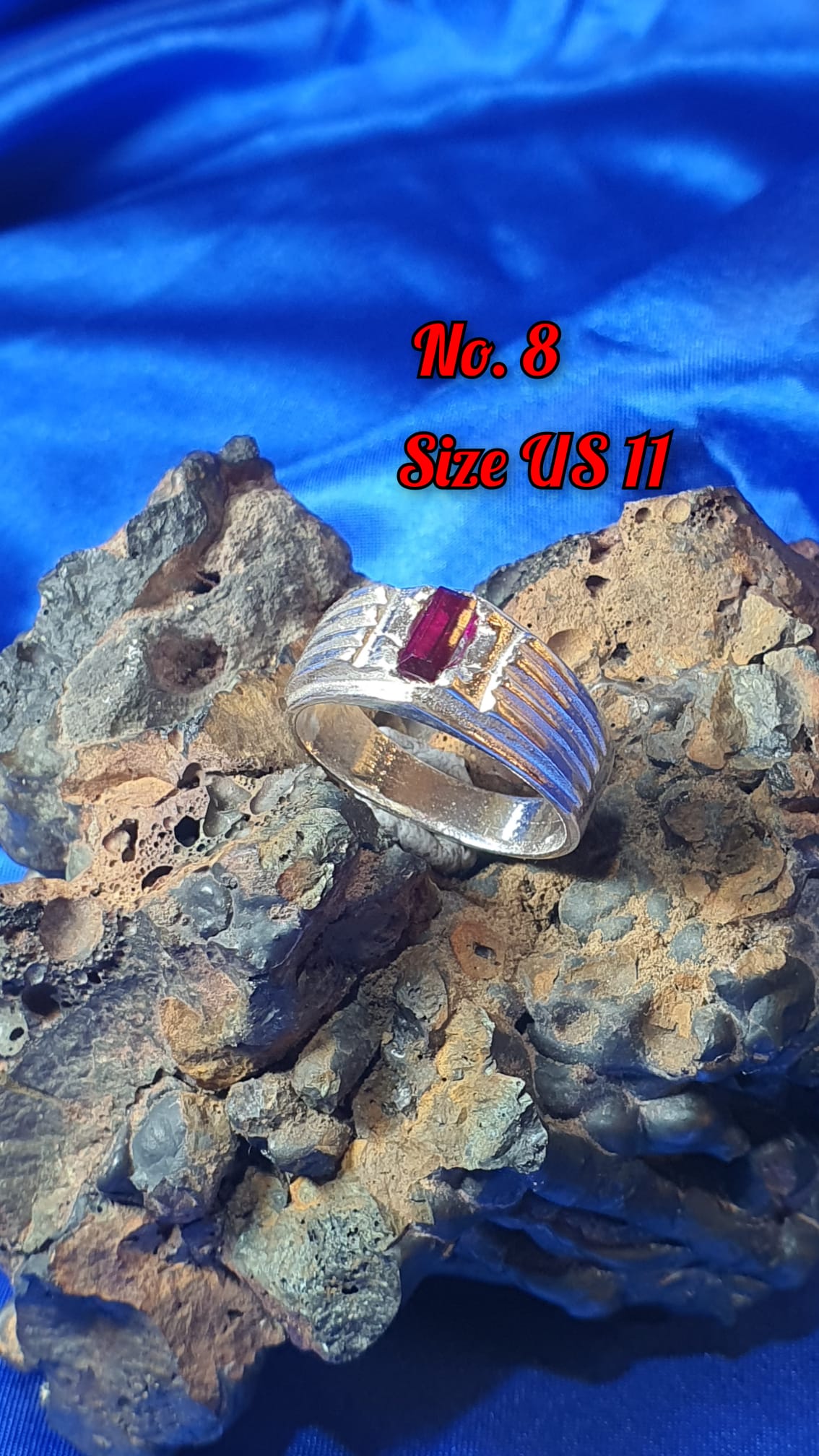 Dear Brothers and Sisters, a very good afternoon to all of you.

After nearly 4 weeks, I am finally back again with a totally new series or Khodamic Rings to introduce to all of you.

The type of Khodams I am introducing are also brand new to me in the sense that I have not come across such khodams ever before.

My first introduction to this type of Khodams was via a phone video call at night from my Chief Conjurer as I sat in bed on the rooftop of a 3 storied farmhouse overlooking a small lake in the northern region of Uttar Pradesh during the chilly winter months of November 2022.

My Chief Conjurer whom I call Chiek Oran was very happy with his recent Conjuration ritual that he had just concluded for the 10 Pigeon Blood and Bright Red Emerald Cut CE rubies that I had sent over to him to have consecrated.

The Rubies are just under 1 carat but as you will see from the pictures attached they are simply awesome in their Clarity, Colour and Cut. I have a Mixture of Bight Vivid Red as well as Dark Pigeon Blood CE Rubies in the collection of the 10 Khodamic Rings made.

Now coming back to my phone call with Chiek Oran my Chief Conjurer, he is an elderly man whom I have great affection for as one would have for a Grandfatherly Figure.

It was just past 9pm where I was and it was Pitch Black save for the Lone Gas Lantern that I had lighted to see my way around the Rooftop of the House that I was residing in at the moment. The Sky was clear with thousands of Bight Twinkling stars and I had been sitting on the rooftop just for the express purpose of admiring the Sky and Nature , something that we don’t often get to do here in Singapore what with our fine city being a concrete jungle and all that haha.

There was a chilly breeze going around coming in over the small lake and the atmosphere was one of peace and serenity.

It seemed almost magical and why I’m describing these details right now to you my readers will be put into context later on as you continue reading.

Chiek Oran was congratulating me on a very successful Conjuration session he had just concluded for over 140 plus Khodamic Rings that I had ordered set in various different Gemstones.

It was then that he told me he was particularly happy and content with these 10 Ruby Rings. Chiek Oran called these 10 Khodams little Treasures that he wanted me to know would be he believed most helpful and a godsend to those who would eventually own them .

In the Words of Chiek Oran , pls allow me to introduce for the very first time ever, the most blessed and Unique Female Khodams

Chiek Oran then related to me more in depth about the Aazeez Yaara Afdal Sadiq Ifriteen, The Dearest Best Friends Ifriteen Yaara in the Chilly Winter Month of November 2022 what I will relate to all of you now ad verbatim,

In my life I have been doing these works for more than 50 Years , to build a relationship with the Roohaini Jinnaths ( Spiritual Entities ) and our fellow men has been my goal. So that The Unseen Ones and Men may both mutually benefit each other in our lives , Almighty Willing.

I have with the Grace of The Almighty been successful in inviting 10 distinct and very helpful female Ifriteen into these Rings that were recently made.

Aazeez Yaara Afdal Sadiq Ifriteen are most special which is why I called you now to tell you about then.

I have only once before been blessed to encounter such Creatures of the Almighty and that was when I was just 30 years old of age.

These Blessed Creatures are believed to be Ifriteen. They are in appearance believed to take the shape of Beautiful Women dressed in Classical attire that would be wine Red in colour if you were to see them.

They are believed to be able to change sizes from a thumb nail size to over 30 feet in length as may please them.

The Traits of the Aazeez Yaara Afdal Sadiq Ifriteen is one of Overwhelming Love, Mercy and Compassion. That is why I have named them thus as well.

These 10 Beautiful Lady Ifriteen are the Dearest Best Friends any Man or Women is believed to ever be able to make contact with in the Roohaini world.

Unlike the Others who may get offended from time to time, the Aazeez Yaara Afdal Sadiq Ifriteen never lose their Affection, Love and Mercy for their Masters ever. It is good that they absolutely loved the Nagina ( Gemstones ) into which I invited them as it happens to be their favourite colour.

Through Thick and Thin, Both in Good Times and In Bad Times these 10 Ladies, the Ifriteen are believed to never abandon their Owners and are believed to always strive for the Ultimate Welfare, Physical, Financial and Spiritual Nourishment of their Masters.

The Aazeez Yaara Afdal Sadiq Ifriteen are Masters of Emotions , they are known to know the Good from the Bad and are believed to tell or signal to their Owners directly whom may be trusted and who should not be believed at all.

The Aazeez Yaara Afdal Sadiq Ifriteen are known to stay awake at all Hours , be it day or night watching over their Masters as the Ultimate Guardians they can be.

It is believed that the Entire Kaaihinaat ( Luck, Destiny and Fate ) all collude together to aid the Men or Women who can claim the The Aazeez Yaara Afdal Sadiq Ifriteen as one of their Own.

It is believed with the blessings of the Aazeez Yaara Afdal Sadiq Ifriteen, that Windfall Luck is greatly Enhanced, so is the Luck of Speculation ( Speculative Luck) great Increased.

Great Mercy, Loving Kindness and Compassion are believed to rain down apon the Master of the Aazeez Yaara Afdal Sadiq Ifriteen akin to how one might be drenched in Heavy Rains during the Monsoon Thunderstorms if caught in the Open.

The Aazeez Yaara Afdal Sadiq Ifriteen is believed to be so loyal that they are known to take a vow before the Almighty that they are willing to go to even Jahanam ( Hell ) in the place of their Masters if the occasion should so call for it.

* It is believed that the Aazeez Yaara Afdal Sadiq Ifriteen are so blessed by the Almighty that even the Nouriant, Shaitaneen and Jinnathi ( The Angels, Devils and the Entire Djinn Tribe ) will not trouble their Masters or whomsoever is protected by the Aazeez Yaara Afdal Sadiq Ifriteen and their Enternal Vows of Loyalty because to do so is believed to incur the Wrath of the Almighty directly.

I was blown away by this Statement after hearing it , this was indeed something I have never heard off before ever happening.

Then Chiek Oran told me he also had specially conjured One Aazeez Yaara Afdal Sadiq Ifriteen for me as well and requested me to keep it close to my heart and never sell it to anyone as he believed he would not be able to repeat this Feat ever again.

He also then told me he had done special Doa ( Prayers) for me with my personal details and told me to now to close my eyes and recite a verse after which I was blessed that Chilly Night with a Vision of the Aazeez Yaara Afdal Sadiq Ifriteen whom had been bequeathed to me via Chiek Oran.

Apon opening my eyes, I observed , a strange glowing shimmering smoke appearing that started 20 foot above the surface of lake of which I had an unobstructed view of from my rooftop. Then I observed as best I could in the darkness a glowing feminine form resplendent in red classical attire appear. She appeared to bow in salutation in a strange fashion with one of her hands towards me and by and by thr strangely glowing smoke dispersed leaving me blown away and feeling blessed.

In that moment I knew I would treasure this incident forever in my heart of hearts.

The next day I called Chiek Oran to express my thanks and some time later I travelled back to Singapore after visiting a few places that I had desired to go to once the lockdown we faced in 2020 and 2021 ended.

I got delivery of the one of the Parcels sometime later in December in which the Aazeez Yaara Afdal Sadiq Ifriteen Khodamic Rings were in.

I have decided to price this Rarest of the Rare, Aazeez Yaara Afdal Sadiq Ifriteen ,
The Dearest Best Friends Ifriteen Yaara at a very affordable price to show my own gratitude to the Almighty and Chiek Oran for the blessings I have received.

Each Ring is Priced at $250 dollars only and while Stocks last. It is my fervent desire that each Person be as blessed as I have felt ever since.

Thank you all for reading my lengthy write up and warmest regards , Babaji

This Write up is COPYRIGHTED by Phra Pirab Occult Specialist Pte Ltd on the 11th of January 2023 at 16.37hrs. All rights reserved.