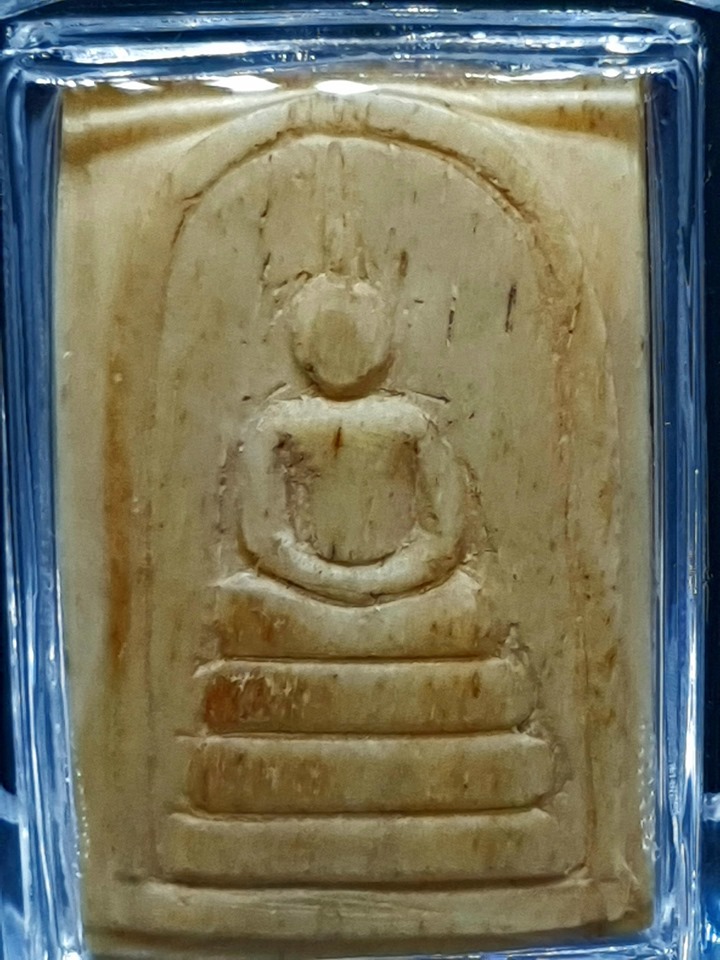 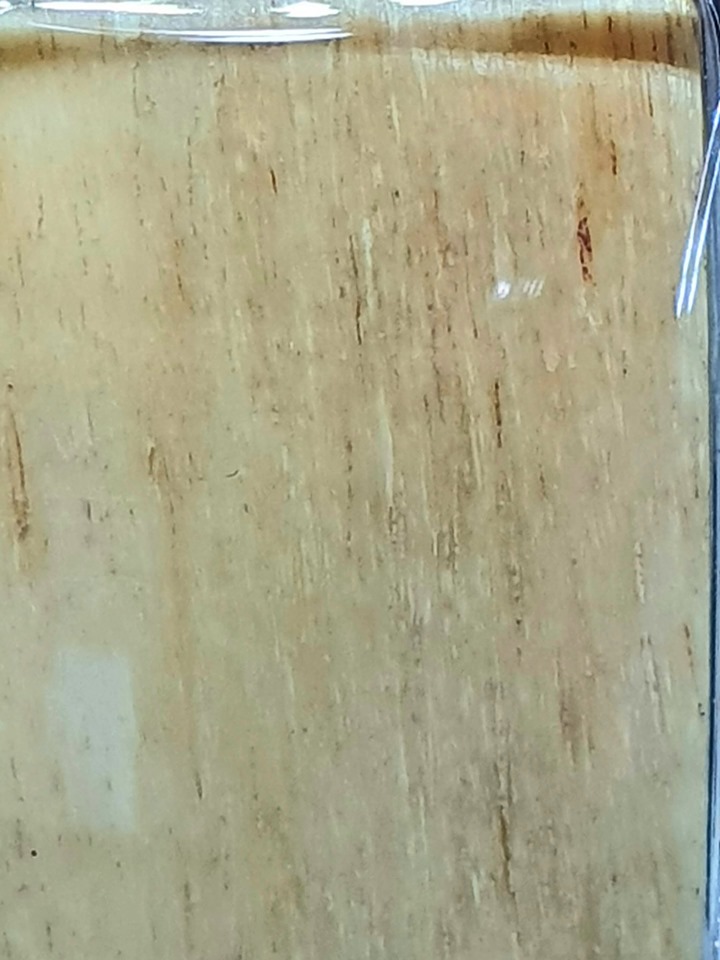 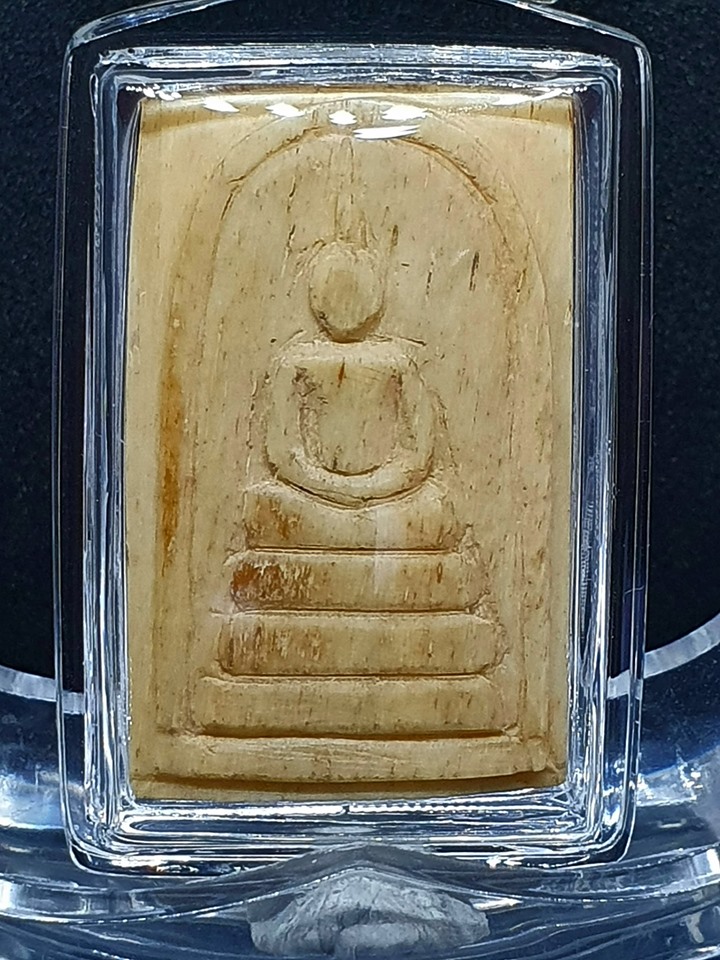 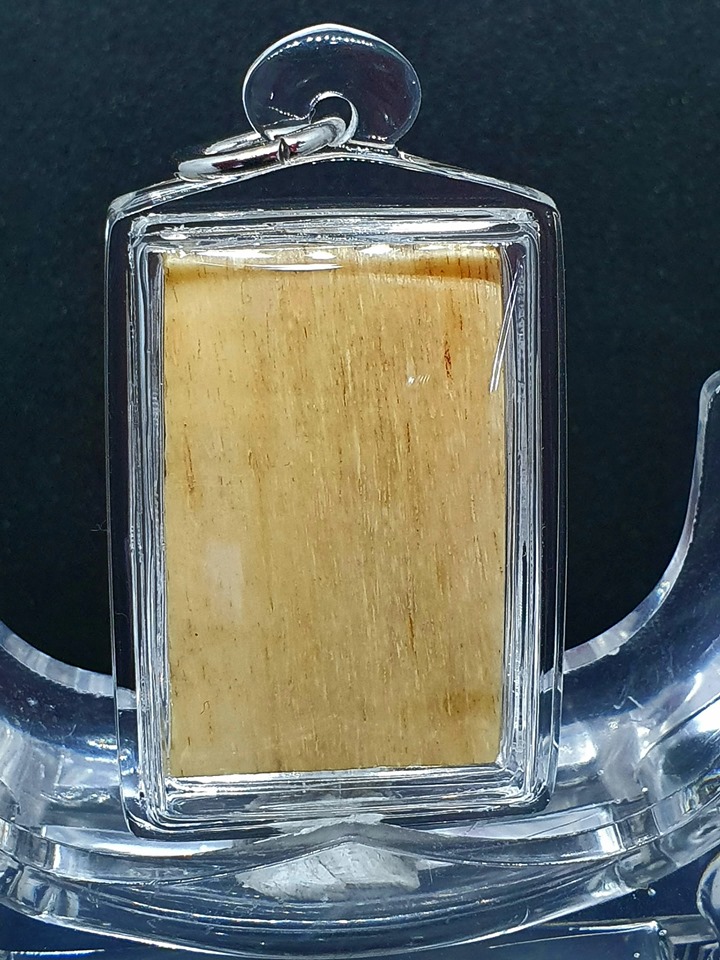 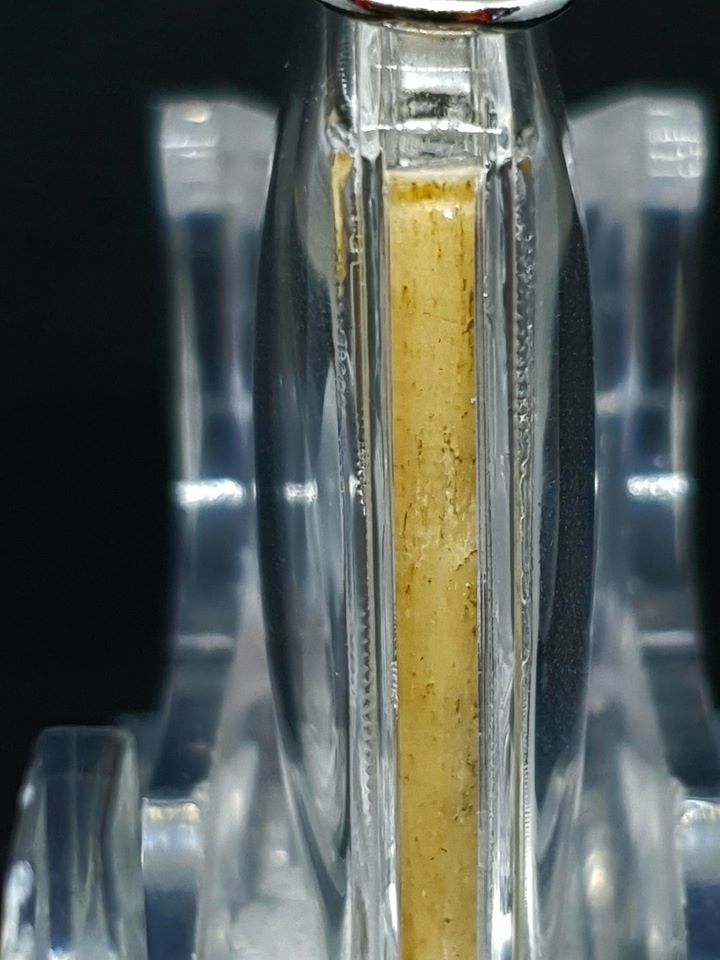 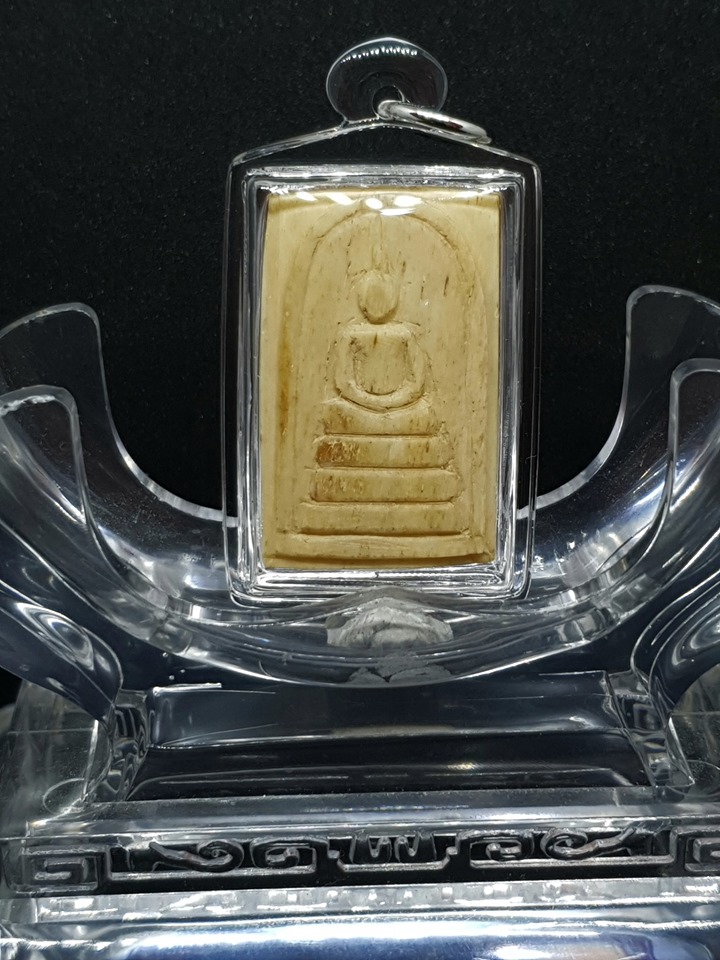 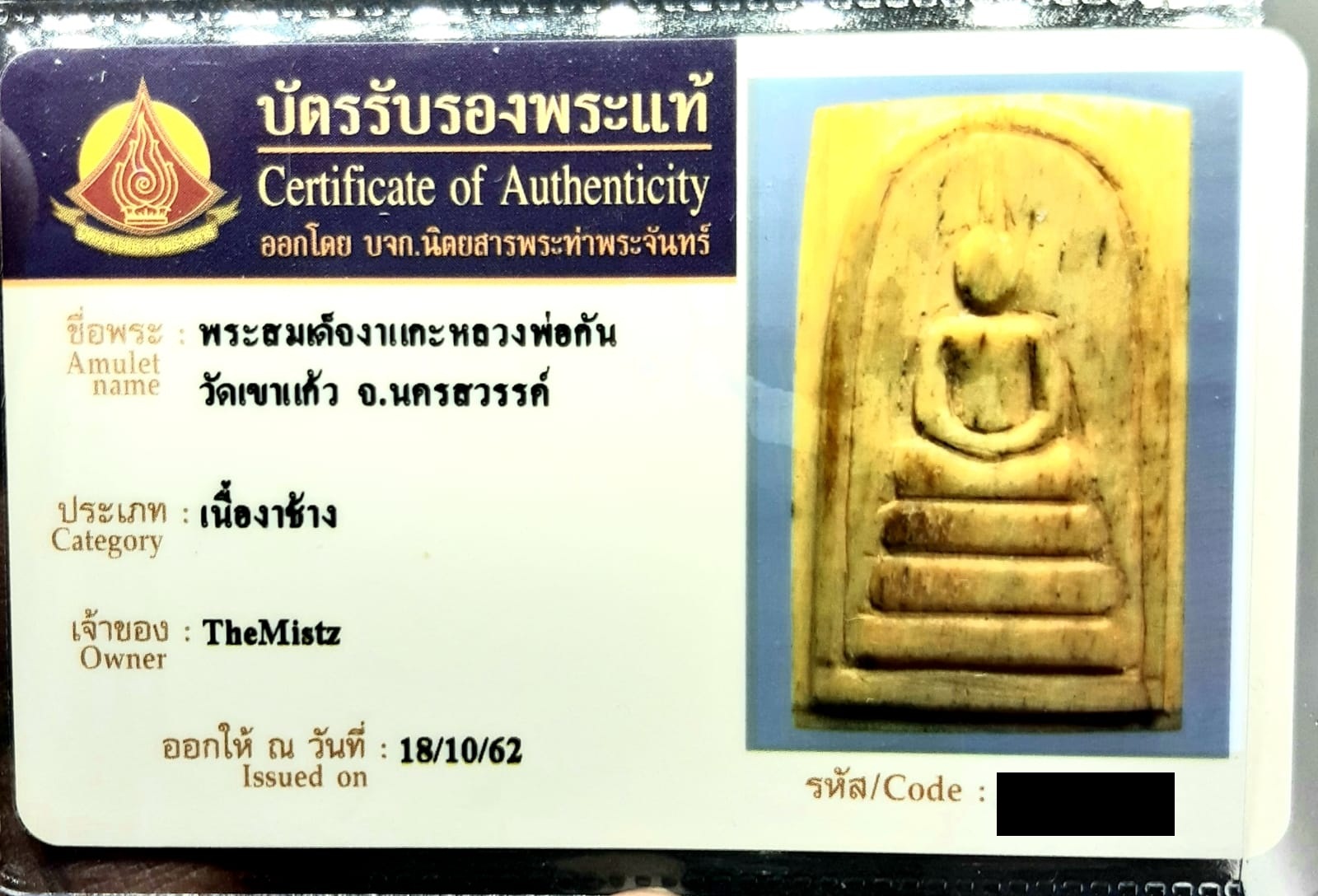 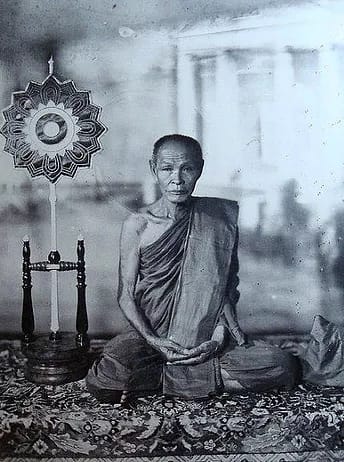 Phra Somdej BE 2500s handcarved and made personally by Luang phor Kant, Wat Kao Kaew, LP Kant is the most senior and No 1 disciple of LP Doem.

BE 2500s handcarved and made personally by Luang phor Kant, Wat Kao Kaew, LP Kant is the most senior and No 1 disciple of LP Doem.

For Serious Amulet Collectors who want the very best of the best. If you want an Old Piece, made by a Famous Monk , if you want an Authentic Old Amulet made of a precious Material then look no further this is the One.

Most Suitable to Bao Kim or Wrap on Gold, we have encased this in High quality Thick Waterproof Acrylic for your Consideration

This Phra Somdej is Unique as only 1 piece of this Somdej was hard carved by LP Kant in Early BE 2500s and there is no other piece anywhere which is similar to this or looks like it.

The Pantina on the Somdej Material has also taken on a deep Light Brown Colour which is indicative that this Special Material ages naturally.

Amulets made of this Material takes on a deep brown luster as it ages over time and this Phra Somdej is almost
**** 7 decades old. ******

Another Indication that this Amulet is Hand carved by LP Kant can be seen by the Chisel and Craving Tools Markings in the shape of very light surface nicks and scratches that are in line with any amulet that is carved by hands and not by any machines.

LP Kant’s excellent hand carving skills can be seen by the almost perfect image of Phra Somdej with the Lines very even and symmetrical in all aspects with the Tiers or Steps leading to the Buddha image very straight and clear.

Amongst all the Hand Carved Somdejs created by LP Kant, this is the most pure and perfect example amongst them.

This is most certain a competition worthy piece that had also undergone rigorous verification to ensure its Authenticity and also had been issued a certificate of Authenticity that Guarantees its is indeed an original and Authentic Phra Somdej made by LP Kant who is the foremost inheritor of his Guru , LP Doem’s Magical Wicha and Skills that LP Doem had taught LP Kant.

As Somdej goes this is one of the most powerful somdej’s ever to be created following the highly disciplined old school arcane magical wicha of Thailand’s Yesteryears Greatest Monks.

This Phra Somdej is Second only to Somdej Phomarangsi Arjahn Toh and LP Doem’s amulets which can cost an extremely high amount of money.

LP Kant was the first disciple of LP Doem, Wat NongPho. He learned almost every wicha there was to learn from his Guru and mastered Meed Moh making including Ivory tusk carving for amulets such as Phra Somdej, Rajasiha, Mae Nang Kwak among others.

It’s widely known that in amongst LP Doem’s disciples lineage, he was the no 1 top disciple who could make equally as efficacious a Meed Moh and Amulets only second to his Guru–LP Doem.

LP Doem had many close disciples;

LP On of Wat Kokdua,

but the most senior and best amongst them is LP Kant.

LP Kant had been ordained in B.E. 2455 and became LP Doem’s disciple in the early years of his ordination.

He was appointed to be the Abbot of Wat KaoKaew
in B.E.2461.

Phra Pirab Occult Specialist
Block 34 Whampoa West #01-33 (330034)
Boon Keng MRT Exit B,
Once u come out the MRT Escalator turn back, behind the MRT Toilet you can see Blk 34, the first shop you will see is a Boon Tong Kee restaurant, just follow the long corridor and walk down u will see our shop as we after in the middle.