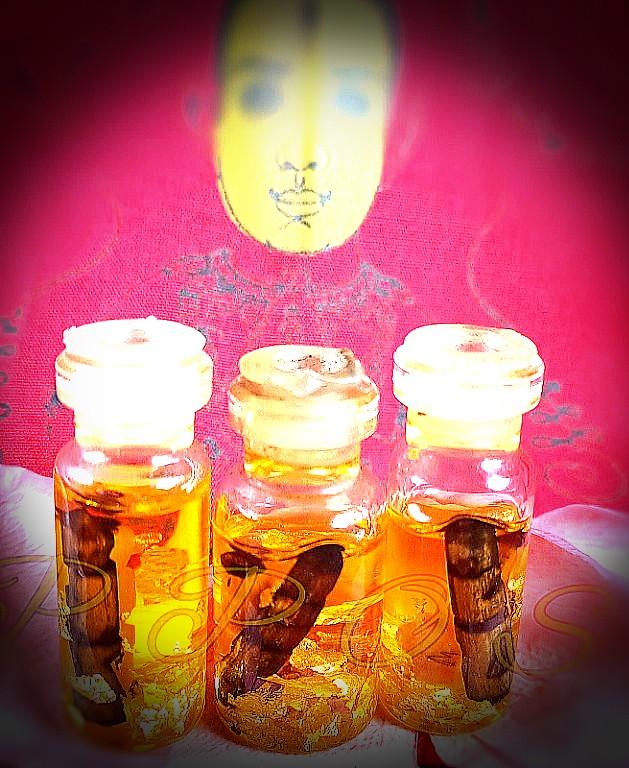 Rak Yom (Twin Child) known to grant wishes and favours to their owners.

Rak Yom are very similar to Kumantong. It is believed to be kind spirits of young boys.

This Rak Yom is made using the wood of Ruk Son and Star Gooseberry Trees.
After they have been carefully carved, They are then soaked in enchanted oil (Nam Man Jan) and yants with special inscriptions on them

Between a KMT and a Rak Yom, there are some differences. mainly the materials used and the consecration process.

Both are believed to be kept for the same benefits.

Rak Yom can be kept in your home and even at your place of business like the office.

It is known to look after your property and will protect against evil spirits, thieves and unwanted presence.

Rak Yom has also been known to help boost your sales if you are in the sale line.
If you are a business man. it is believed to bring you more profitable business.
Rak Yom is also known to pull or attract more customers to your establishment. It is believed to promote good customer relationships.
As you can see, It is known to bring in wealth.

Rak Yom is also known to grant wishes and favours to their owners.

Not only are they active, they are also known to be obedient.

This is a reason why, in Thai culture, everybody loves to keep a Rak Yom as a part of their daily life.

Rak Yom is known to protect its owner from unforeseen dangers and accidents.
It is also believed to help you avoid getting into arguments, social politics and stops backstabbers.

They are known to “hint” to their owners’, of any unpleasant event that is going to happen and helps the owner to avoid it.

Rak Yom is known also to be used to promote good Metta – Maha Niyom (Interpersonal relationship and loving kindness) and even for attraction.

In the old days,, Thai people are known to use Rak Yom to get back their ex lovers and this simple method become popular in Malaysia and Indonesia.

Soon, because of this, Rak Yom became very popular in Asia
(There is a specific method to use the Rak Yom to call back an ex lover)..

Rak Yom is very easy to look after. With simple offerings and la little commitment , many benefits will come your way.

This particular batch of Rak Yom was personally blessed by LP Arkhom during one of his visits to PPOS, 8 years ago.

We have been keeping these Rak Yom and were only selling it to our regulars.
Today, we would like to introduce it to all so that you get to appreciate its benefits.

Luang Phor Arkhom is the abbot of Wat Suan Ba.

He is a tudong monk and have travelled extensively to and fro the dense jungles that borders Cambodia and Thailand.

He has also spent time in Surin and in the Issan province.

Luang Phor Arkhom is the grand master of the Cambodian wiccha system, “KABALA” and he also specialises in Metta, Maha Saneh and Maha Niyom.

He is also highly sought after in Thailand for his Reconciliation Rituals.

Luang Phor Arkhom is a highly respected monk. So much so that the Mayor of Sakeow province regularly seeks his advise.

Below is Bro Nick’s first impression when he met Luang Phor Arkhom for the first time.

When HE, Arjan,first stepped out from his kuti, I felt a vetry strong aura. It was strangely fierce but friendly. His smiling face and body language clearly emit strong metta and maha niyom but he also had a no-nonsense aura about him. Without even talking to me, he pointed his index finger at my forehead and beckoned me into his kuti. Yants are drawn using a bamboo stick on my skull and forehead and a single gold foil was pasted on my tongue. The taxi driver explained that Luang Phor can see that I lack metta, maha saneh, maha niyom and nanatong and had blessed me with the qualities that I sorely lacked. He then finished the blessing ceremony by knocking me with a very BIG PALAKID. My whole body felt strangely warm and energized. It was one of the few times that I can actually feel something after a blessing ritual.

We then invited Luang Phor Arkhom to PPOS. He graciously agreed and gave us various takruts and amulets. He even generously gave Babaji the BIG PALAKID.

However when the time came for Luang Phor Arkhom to come to PPOS, there was major flooding in Thailand in 2011.

Luang Phor Arkhom had to stay in his village and help treat the villagers from the various infectious diseases that was caused by the damage done by the flood.

** He is also specialised in the Ancient Art Of Phra Rak Phra Yom, Sons Of Phra Ram Wicha which has Sanskrit origins.

This is what we have, which was personally made by a powerful monk and are putting up for sale today.