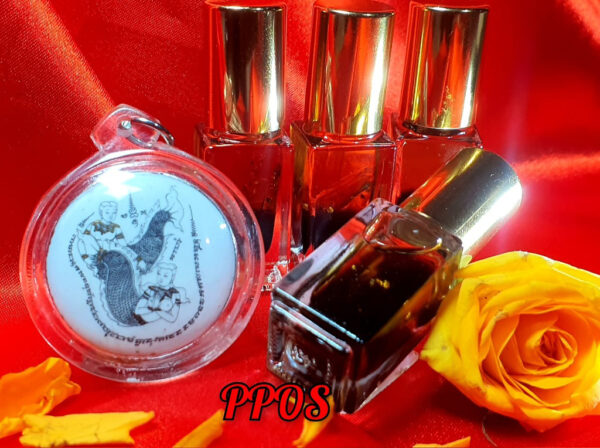 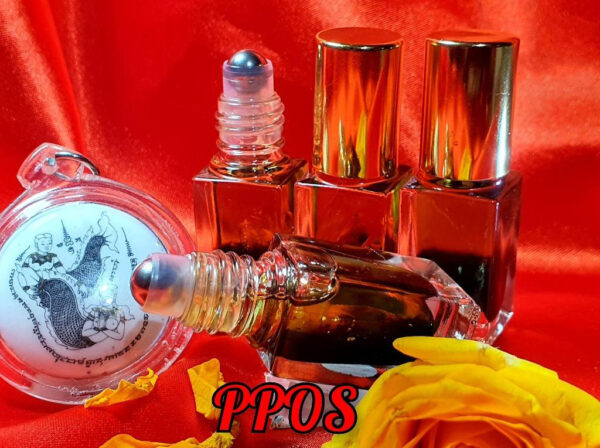 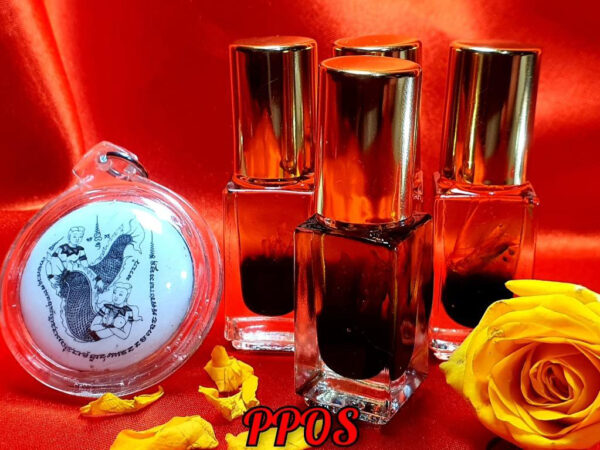 A Few of the Ingredients used are as follows, A very Special Naturally Scented Brown Holy Soil from Mount Sinai where Nabi Musa is said to have received the 10 commandments.

This Soil is believed to be charged with very Holy and Positive Energies and Vibrations which would naturally be transferred onto the Wearer apon use and application. Mount Sinai is believed to be Sacred Land located in Egypt.

Pure Mani Gajah , Namman Chang Dark Amber Crystallized Chips which are believed to contain very high levels of pheromones that when applied is believed to make the Wearer become very irresistible to members of the Opposite Gender. It is also believed to be Very Good for Seduction as well as strengthening Existing and New Relationships

Pure Puteri Ikan Duyong Mermaid Tears ( Also called the Dugong ) the Tears of the Ikan Duyong or Dugong is an extremely rare commodity that is extracted painlessly from the Animal.

Its color is believed to be dark amber and not colourless as some scrupulous online sellers who are selling lead their customers to believe.

As seen from the Picture, our Talismanic Oil’s color is what it should actually appear to be like as we are the original Shop to first Market this Product in the past. In the Early days we used a small amount to mix into our Talismanic Charming Oil for which we received great reviews but in recent times Babaji has focused more on Quality rather than Quantity hence now generous amounts of this rare ingredients are used for very small limited quantities. This time round Babaji only released two highly Concentrated Puteri Ikan Duyong Charm, Opposite Gender Attraction and Seduction Minyak Pelet Oil.

Last but certainly not in the least, Highly concentrated Minyak Pelet Seduction Oil was added as well which you may observe as being the Dark blackish Oil Hue. The Minyak Pelet Oil is legendary in the sense that almost everyone who is a romantic at heart is looking for it but they have had to settle for cheap substitutes which are passed off as Minyak Pelet but dont even come close to being the real Thing.

The reason why we are describing what these rare items should actually look like and what they are is so that our valued customers can empower themselves with real knowledge about these mysterious and mystical oils and not be cheated by some unscrupulous online sellers who try to pass off the fakes as originals.

A quick search on Carousell would land you many so called Duyong mermaid tears oils which are nothing like the real stuff but are instead knock offs trying to pass as the real deal.

Knowing that Knowledge is Power, we have hence included the actual details of what these rare items look like an appear to be so that no one may get hoodwinked.

Lots of other unnamed but equally potent ingredients were used in the making of this Talismanic Oil that were not named to prevent ardent copycats from trying to imitate us.

It is believed a single dab of this Oil will produce most positive and unbelievable results where, Seduction, Opposite Gender Attraction and Charming Powers are required.

People are believed to stop what they are doing to take notice of the User with many being strongly attracted towards the user without knowing why.

This Oil had also been strongly blessed and empowered by Sacred Prayers, Verses and Rituals and is believed to be Undetectable by any Shaman, Bomoh or Magician, so no one would be able to tell or find out what the User had been using.

Here we can guarantee the following.

So for those who remember that Babaji was amongst the very first to ever create such a Talismanic Oil, know this that now its is greatly improved with all encompassing Powerful and Potent Ingredients added as well.

Some of the other Effects this Talismanic Oil is believed to bestow include but are not limited to,

◾ Strong Attraction and Pulling from the Opposite Gender

◾ Increases your Charm, Magnetism & Attractiveness to Mesmerise Your Targets

◾ Creates a lasting unforgettable experience in the minds of those whom you interact with and make your targeted person miss your presence.

◾ Possess a high level of Charming aura and Vibrations

◾ Be Well liked and Admired by everyone easily

◾ Easily gain Favours, Mercy and Sympathy from others, people are believed to be compassionate

◾ able to Seduce anyone by Sweet Talking, People love what you say, (loving Kindness)

◾ Make others listen to you and do as you say, obeying you

◾ Win in any Negotiations,

◾ Possess a strong sense of Self confidence and high Self Esteem

◾ Prolong Lovemaking, Experience a high Level of Pleasure during Intimacy

Pls pm us to Find out.