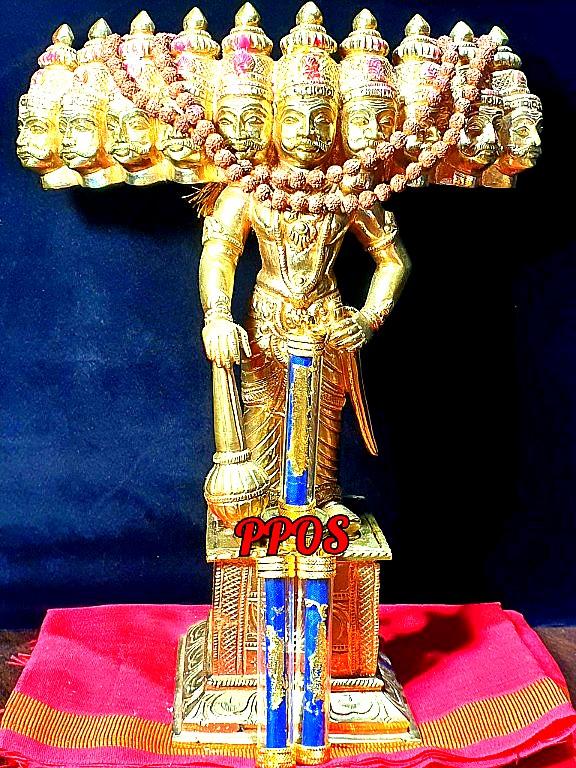 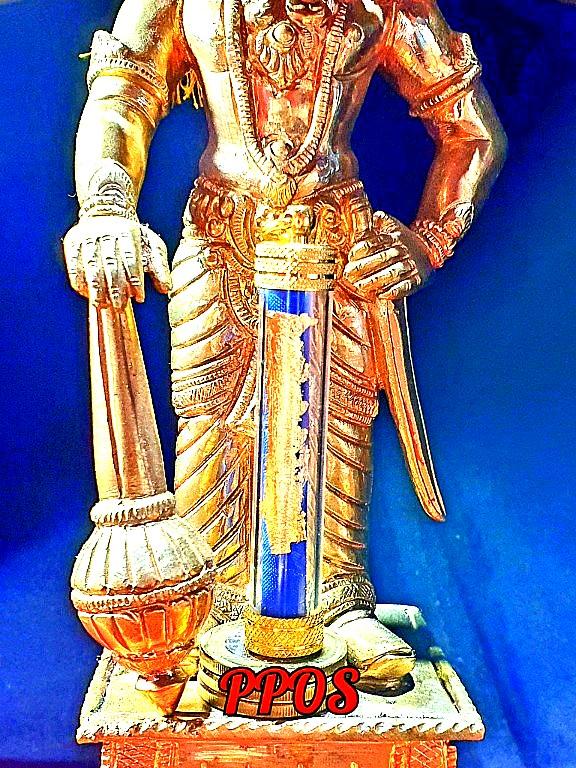 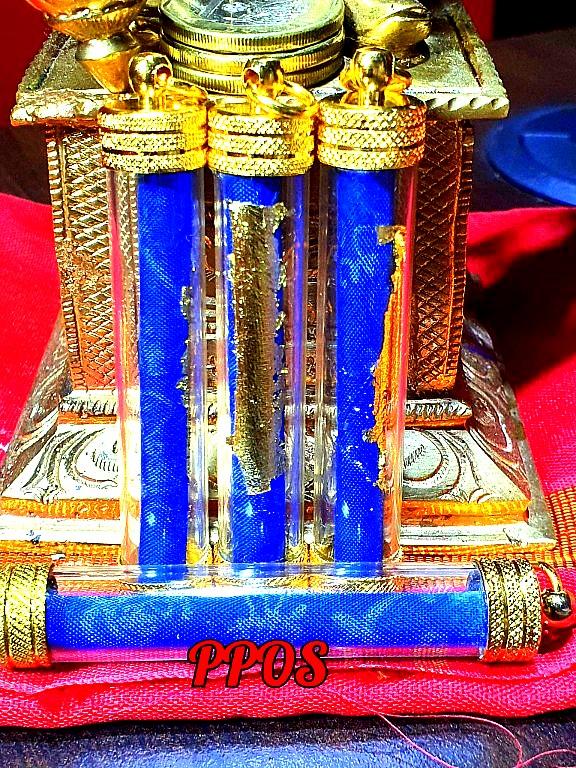 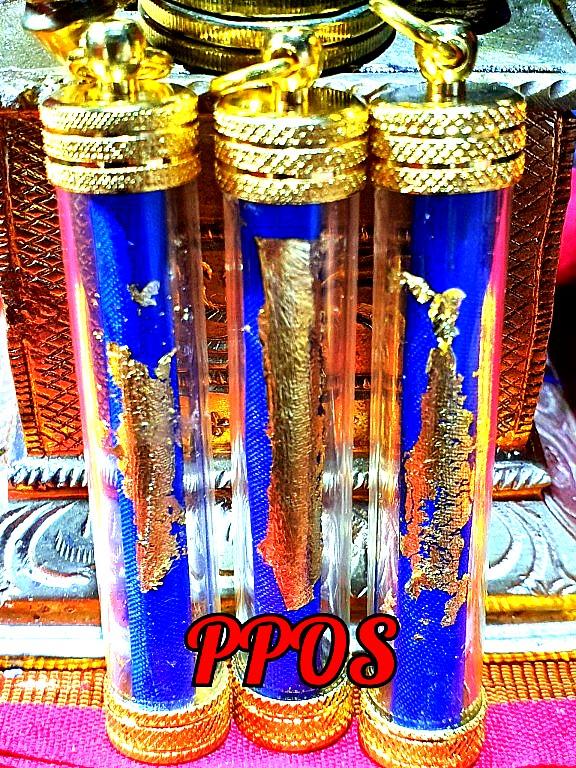 LEGENDARY 7 ASURA TAKRUT Originally made by Babaji believed to be for – Excellent for Wealth Fetching- Sudden Windfall, Fortune Fetching, Wish Granting and Fullfillment of Desires

Introduction By now it is believed that most people in Amulet Circles have heard about the Asura Takrut. 💯 %Handmade by Babaji. This Takrut Believed to be Extremely Wealth Fetching for the wearer. This Powerful Takrut Known of by names of 7 Legendary and Mighty Asuras and is formally named “”Saath Mahabali Veer Asura” This Mainstream Takrut is believed to attract the Positive Life force Energy and Essence of 7 of the MOST POWERFUL Asuras of All time and that is further empowered by the Divine Blessings of Baba Bhootnath ( Lord Shiva )

These 7 Asuras are believed to –

be Extremely powerful than most Devas and Deities that include Lord Indra (Phra Inn, King of Devas), Lord Kubera (Taowessuwan, King of Yakshas of Yakkas and Lord of Wealth), Lord Yamaraj (Phra Yom) Lord Agnidev (Lord of the 7 fires).

Principal Deity is believed to be Lord Shiva in the Form of Baba Bhootnath. In this form Lord Shiva is the God of Gods of all Creatures and Beings of the Night.

It is Believed That Empowering the Takrut further are the 7 Valiant and Powerful Asura Deities ( Saath Mahabali Veer Asuras ) who have remained unchanged as per the very first Asura Takrut done many years ago.

The One and Only. The Original Legendary 7 Asura Takrut is based on Babaji’s 7 Asura whom are believed to reside within him.

We have countless customers who have shared with us over the years the blessings they were enjoyed. Just have a look at the testimonials and good reviews we have received over the years.

If you looking to have just one Blessed amulet or Takrut then we highly recommend this Mainstream Asura Takrut.

It’s so popular that so many others have been inspired to copy Babaji’s Original Asura Takrut.

Many old Timers in Amulet Circles would know that Babaji’s Legendary Asura takrut was actually originally created in 2011 by Babaji.

After a decade of Launching the Asura Takrut the Good Reviews far outweighed the Bad reviews to the point that many masters had come up with their own versions of the Asura Takrut later on.

Yet all the Inspired Copycat Asura Takrut makers have been caught using our Phra Pirab Occult Specialist 2016 Asura Takrut write up which was posted on our Facebook page. .

All in the loop would agree based on the very earliest records, that The Asura Takrut was first created and conceptualized by Babaji himself.

We have all the evidence to this end to show our customers and a quick search online will show the same. This is what we feel,. There can be many Copycat versions of Babaji’s Asura Takrut available online but most will opt to get the Original Asura Takrut.

In light of all the recent inspired Asura Takrut there is out there in the Market, Babaji had changed the Color of the Cloth from Black to Blue to prevent any confusion.

Everything remained the same except the color of the cloth.

This was done because many customers got confused as to which is the Real Legendary 7 Asura Takrut out there.

Phra Pirab Occult Specialist is the Only Shop Selling Babaji’s Asura Takrut so we hope there is no further confusion.

Lastly the Number 7 was chosen for the Legendary 7 Asura Takrut by Babaji as its his Birth day Date as well as the fact that Babaji had 7 Asuras Sakyant Tattoo on his Right Arm.

The significance of the 7 Asuras here is purely Personal Affinity and not related to any scriptural records of the Asuras.

we are glad to clear this up as well.

Finally, here is the Original 7 Asura Takrut write up details which follows as below, This extremely special Takrut is unique in the sense that no one had even seen or heard about this kind of item before it was first made by Babaji. It’s the first of it’s kind here in Asia.

The Asura Takrut is the brainchild of Aghoreshwar Babaji. This Powerful Takrut contains the names of 7 Legendary and Mighty Asuras and is formally named “”Saath Mahabali Veer Asura” In Hinduism and even Buddhism, there are Devas and Asuras. Asuras are beings who compete for power and oppose the Devas.

Asuras are depicted as demonic beings that are very powerful and intelligent. Unlike the Devas, Asuras are very proud, arrogant and extremely materialistic. Despite all that, Asuras also have their fair share of good qualities as well. There are many legendary Asuras in Hindu text who are highly respected and even worshipped by great personalities in vedic history such as King Ravana, King Banasura, Lord Kirtimukh, Lord Bali, Lord Veera Badhra and many more that we cant name here.

Within this Takrut is captured the essence and energy of 7 of the MOST POWERFUL Asuras. These 7 Asuras are without any doubt more powerful and mighty than most Devas and Deities that include Lord Indra (Phra Inn, King of Devas), Lord Kubera (Taowessuwan, King of Yakshas of Yakkas and Lord of Wealth), Lord Yamaraj (Phra Yom, Lord of Death), Lord Agnidev (Lord of the 7 fires). These Asuras are mightier and cant be compared to any spirits / underworld deities like Phra Ngang, Prai Tong, Lukok, Kumantong and even some divine Lersi as well.

This Takrut bestows all manners of magical and spiritual qualities to the keeper, you have only to think about the effect you’d like in order to have that effect materialize. Meaning, whatever you ask, you will get sooner or later. Like mentioned above, the characteristics of Asuras are materialism and arrogance and they wont hesitate to show their abilities and bestow great wealth to the keeper just to show how powerful they are.

There are many benefits and magical properties just by simply carrying or wearing this takrut as it is imbued with each and individual magical properties from the 17 different ingredients added. Each ingredients bestows the wearer with different properties great wealth, attraction, protection and many more that are too many to name. This Takrut also works as the ultimate barang supercharger. You just need to place this Powerful takrut near barangs to charge them with immense power so that u never need to have them blessed again.

With this powerful takrut, all spirit and soul item amulets are kept “fed and satisfied” so you can do away with elaborate offerings. This Takrut can “charge up, Gumanthongs, Lukoks, NMP, Mae Hong Prais, Ngangs and more. (Very Powerful Spirits and Underworld Deities ) Barangs from different Faiths are also included and benefit from the power of the Asuras. A special blessing ceremony to empower this takrut was done by Babaji at the cemetery which took place after sunset way back in 2011.

Babaji then invited the Number 1 Most powerful Asura “BB” to trance into his body and empower the takruts personally. This is how the Asura Takrut was made those years ago. If You will like to purchase our Original Legendary 7 Asura Takrut by Babaji then pls msg us.

All Our Write ups are now strictly copyrighted by Singapore Intellectual Property Laws and any plagiarism will result in a lawsuit. We will not hesitate to take legal action against would be offenders. **The following information associated with this Amulet/Khodamic Item/Product was obtained through translation, reproduction and expresses the Religious beliefs and Opinions of the Maker/Master/Holyman and Devotees and Or Followers We have presented the information as it is direct from the Source. Thank you