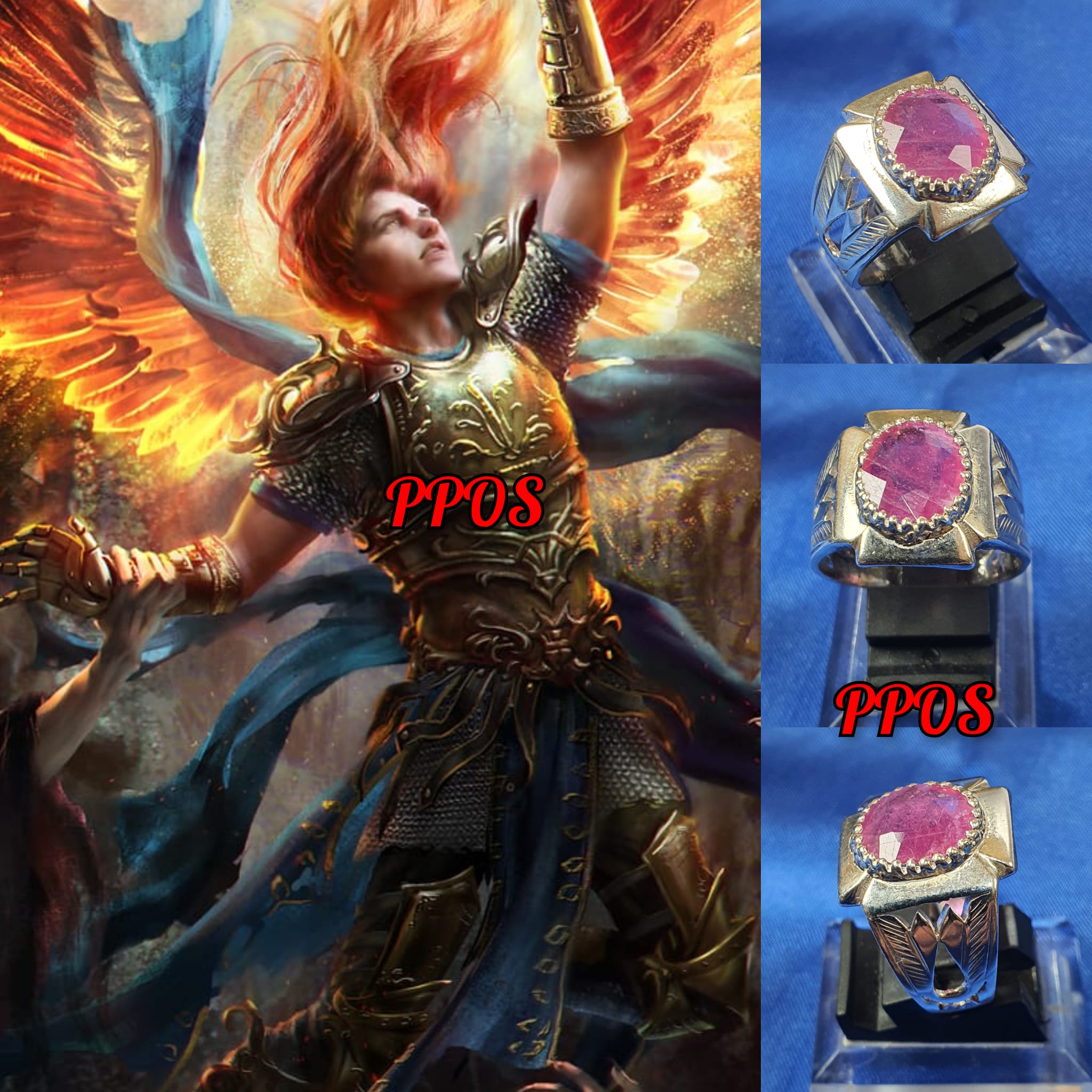 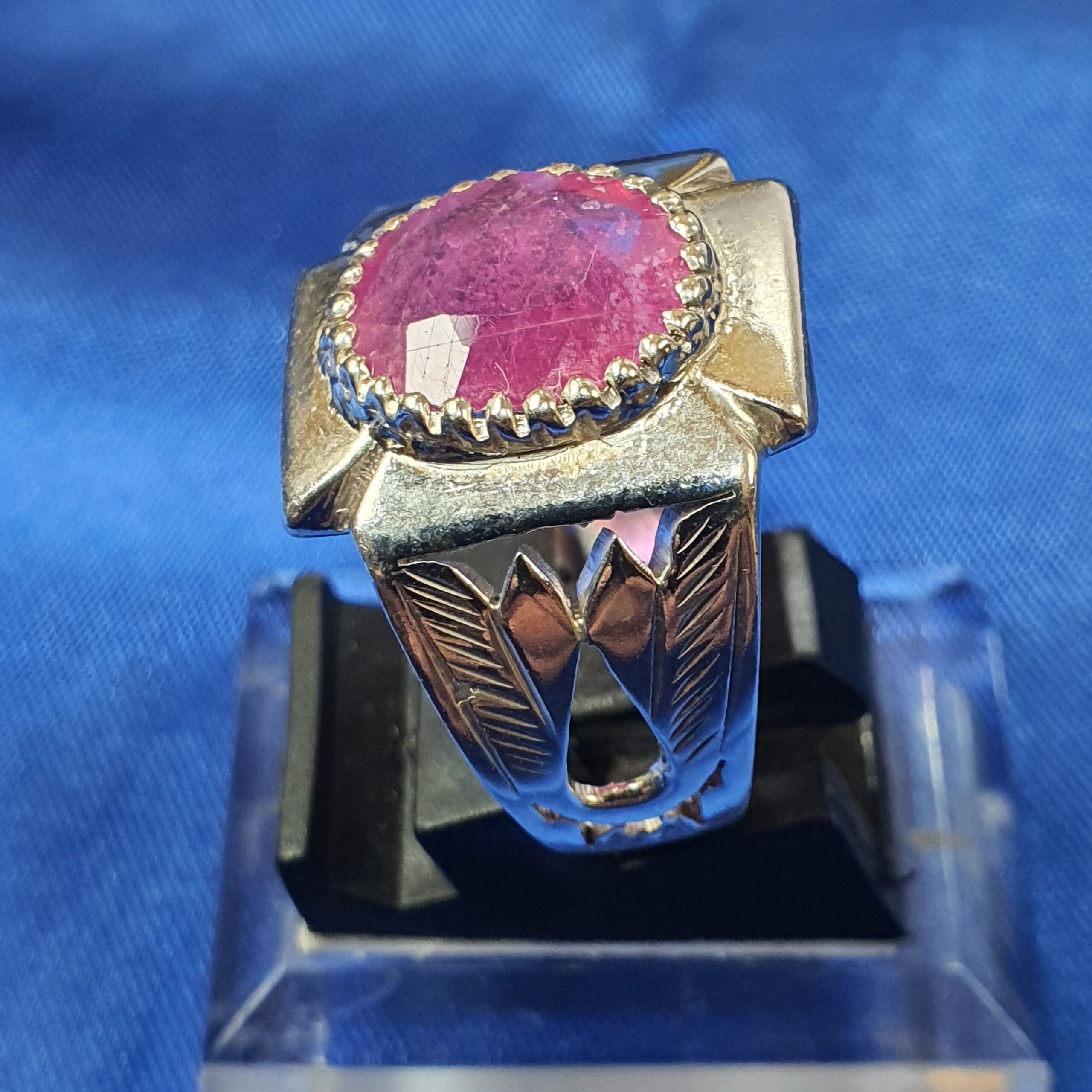 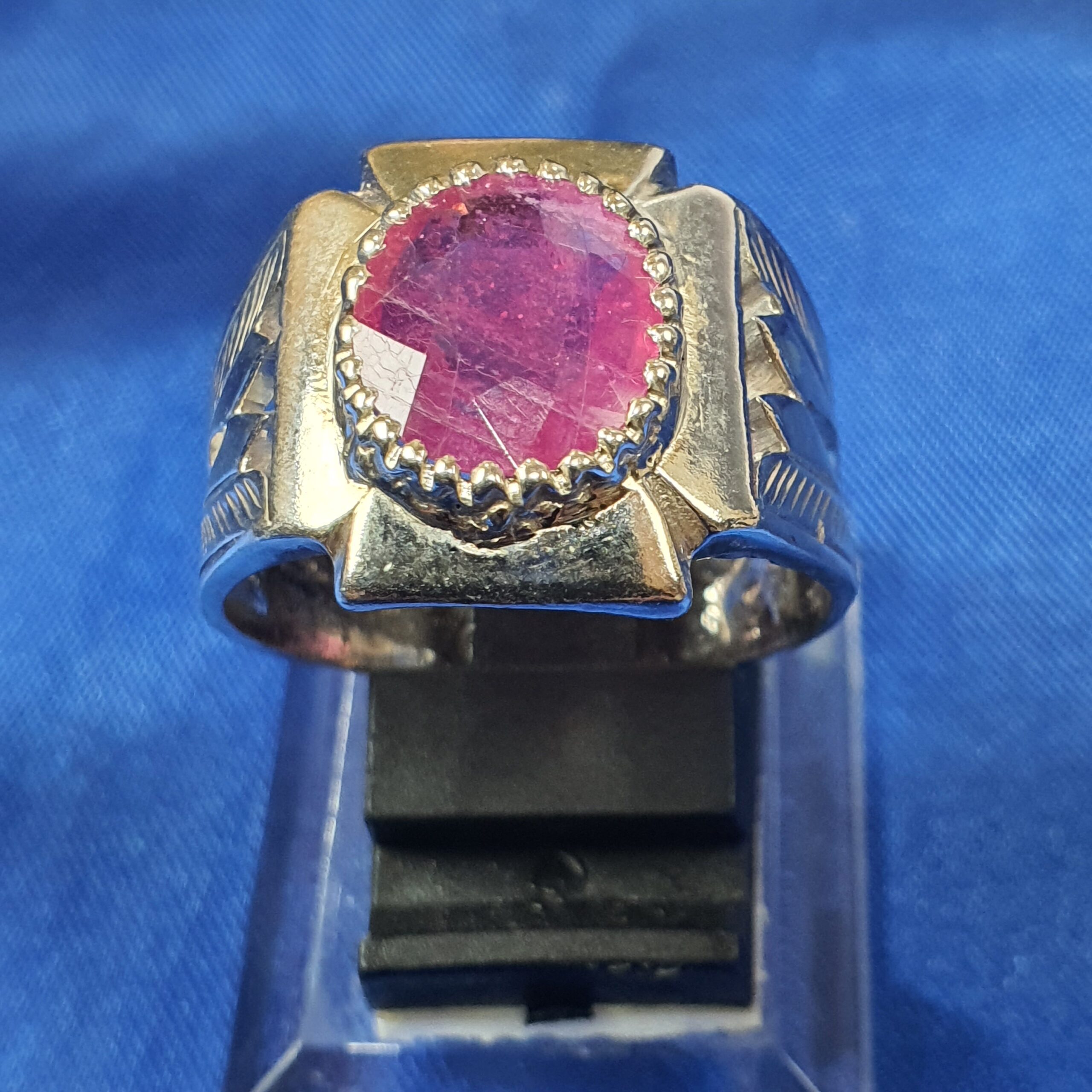 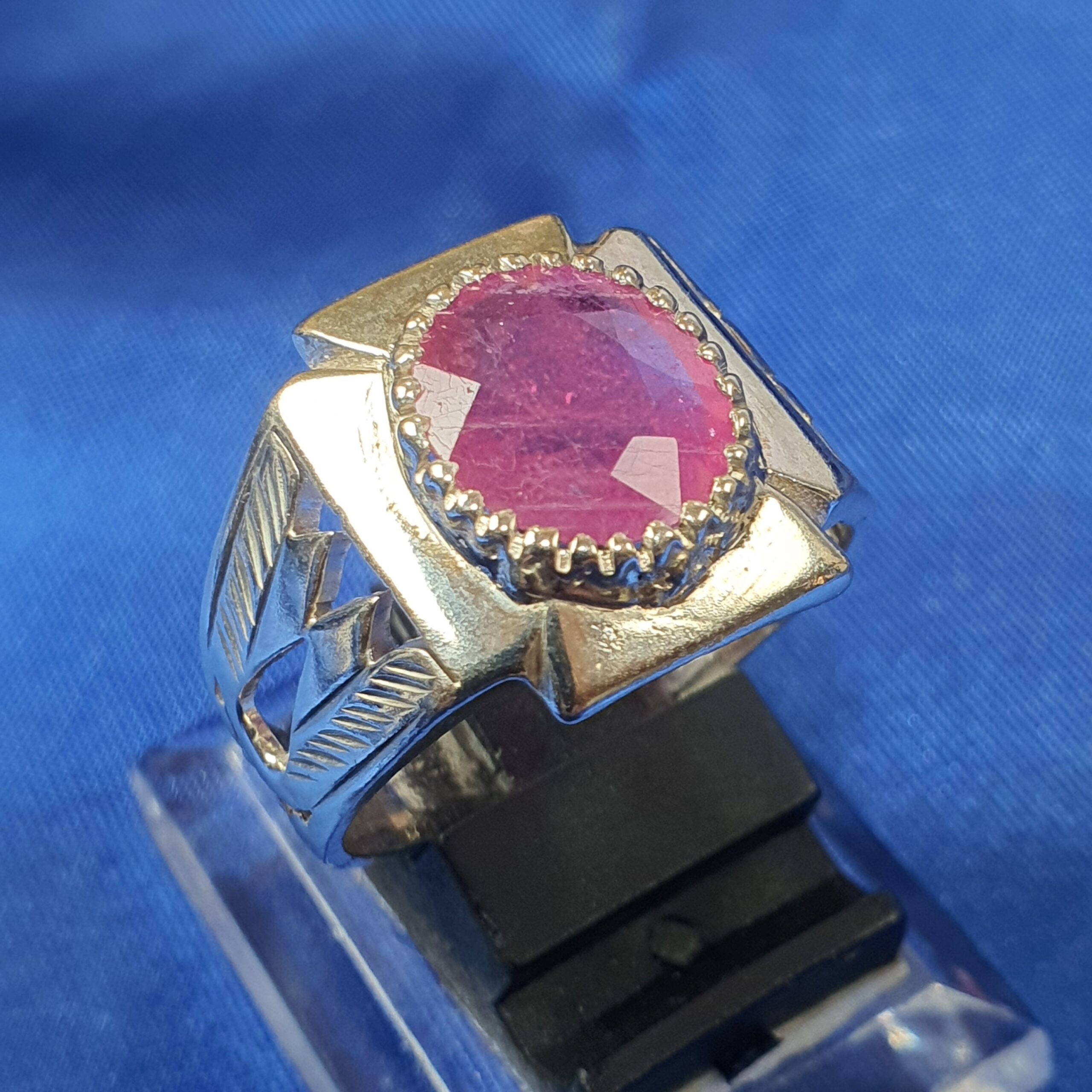 Greetings to All Brothers and Sisters, I’m glad to be back to introduce this Magnificent Khodamic Ring to all of you today.

The Khodamic Ring I have today is an Authentic Heated Ruby Gemstone Ring of 8 Carats.

The Design of the Ring is reminiscent of the St’Georges Cross.

This is to pay tribute to this Powerful Khodam who is believed to belong to the Abrahamic Faith.

This Khodam is believed to be the Ifrit Equivalent of the Djinn or the Seraphim equal to the Angels of the Highest order with 9 or 12 wings.

He is known as The Greatest Protector Aljina Alhami Alaeizam or Triple A ( AAA ). The Ring is fashioned with high content 925 Silver and this ring is completely handmade.

The price while costly is quite reasonable when you realise the Gemstone is an Authentic Ruby and the Ring is handmade from scratch.

The cost of a Ruby Gemstone Ring of this size and quality will be easily 5 times as much.

Now let me briefly touch on the Qualities of The Greatest Protector Aljina Alhami Alaeizam or AAA.

He is believed to be an ancient Djinn created from the Flames of the Smokeless Fire.

It is believed this Khodamic Being was created by the Almighty directly at the beginning of Time.

Now there are many Djinns that are known to be created out of Union between two Djinns much like we humans procreate.

And then there are others, thr true Immortals who have existed since the beginning of time, who are believed to have been created by the Almighty directly.

The The Greatest Protector Aljina Alhami Alaeizam is one such rarity in that he is known to have come into creation at the hands of The Great Adonai himself.

Now It is believed that beings just like him were created in the sum total of 3333 .

This is their magical number which I Babaji have found out after much research and travelling as recently as last month when I went overseas to learn more from my betters.

This information is shared freely so others may benefit from this information but pls beware of a copycat who has been copying my write ups and using it to sell his own so called khodamic items.

Any time you are in doubt as to who is thr original content creator of this Write up kindly pm us and we will show you a timestamp of our original write up which the copycat cannot produce due to him having copied it.

We have akl the evidence on hand which which we are taking action as we speak.

Now allow me to go back to discussing this Great Djinn. He is believed to protect his Owner against the 3 Major Misfortunes.

So what does this mean and why is this considered the 3 Greatest Misfortunes? Well the Misfortune of Gurbaat or Poverty is known to cause endless sufferings, so he is believed to protect against that. The Misfortune of Buraa Tabiat is believed to be when one suffers from Poor Health and leads to emotional and mental and physical anguish as one suffers from delibilating illnesses that has no relief in sight.

Just ask any successful person who is in poor health and they will tell you that the Greatest Wealth is Good Health and lastly he is known to protect against the Misfortune of Akaal Mrityun or Untimely Death. Untimely Death is something that haunts almost everyone from their middle ages onwards.

It is the constant fear that Time will suddenly run out for them without the opportunity of living or realising one’s dreams and aspirations.

It is the not knowing if you will come back home at the end of the day as you are leaving the house in the morning to go do your work or attend to your commitments in the outside world.

The fear of Untimely death is constantly at the back of one’s mind whether we board the plane to take a flight, as we start the engine of our motor vehicles to go on a journey or as we lace up our shoes to go for a run. While it is indeed true that Death is Entirely God’s will , it is also true that the Almighty in his infinite mercy and compassion has indeed also sent out his Angels and emissaries into the world to protect his creation from such dangers.

The The Greatest Protector Aljina Alhami Alaeizam is believed to be one such Emissary of the Almighty made for expressly this Purpose.

Now let me tell you what is revealed to me, Babaji about how Triple A or The Greatest Protector Aljina Alhami Alaeizam is known to work or show his effects.

His magical number and time is 3. It is believed that when his Khodamic Ring is worn, in 3 days it is known to show its effect on one’s health.

This is believed to keep progressing positively from then on. And within 333 days of continuously wearing the Khodamic Ring of Triple A, The Greatest Protector Aljina Alhami Alaeizam , it is strongly believed that thr wearer ia granted a vision from This Khodam where he is ia believed to bring the soul of the Wearer into the presence of the Almighty to receive the blessings of being protected against Akaal Mrityun or Untimely Death.

Now these things have been explained to me in detail, I have read and spoken at length about this Khodamic Ring to verify what I’ve heard and finally have written about it to the best of my own understanding. Now I will give my own observations about this Khodamic Ring, it is sturdy and has a heft to it, this silver ring is well made and the Gemstone definitely does radiate with a strong power and energy unlike any other I’ve seen or experienced before.

I have no doubt about this Khodam as I have seen in my minds eye images of his sending about his origins. All I will say is that the The Greatest Protector Aljina Alhami Alaeizam has a biggest heart I’ve ever seen. It is so big as to metaphorically fit the whole world or dunia within it.

Triple A or The Greatest Protector Aljina Alhami Alaeizam is believed to be a most caring and compassionate Khodam with limitless powers and I’d love for one of my customers to have him. I myself have one of his brethen as my own since some time back.

I highly recommend this Ring to all. All are welcome to try on this Ring or come down to view it.

This Write up is COPYRIGHTED by Phra Pirab Occult Specialist Pte Ltd on the 6th of December 2022 at 12:43 hrs . All rights reserved.

If you see this Write up anywhere else except for on Phra Pirab Occult Specialist Pte Ltd website or related social media platform’s pls do note that this Write up has been copied by a shameless copycat of whom we are well aware of.

Kindly ask for proof of timestamp of original write up which only we will have as original content creators. Meanwhile we are already in the process of taking action against this COPYRIGHTED theft.

Attached in the link below are of Some Customers Best Testimonials and Reviews for you to see and consider. Unedited Testimonials can see viewed at our Shop without any obligations,
https://www.facebook.com/media/set/?set=a.2716741865100870&type=3