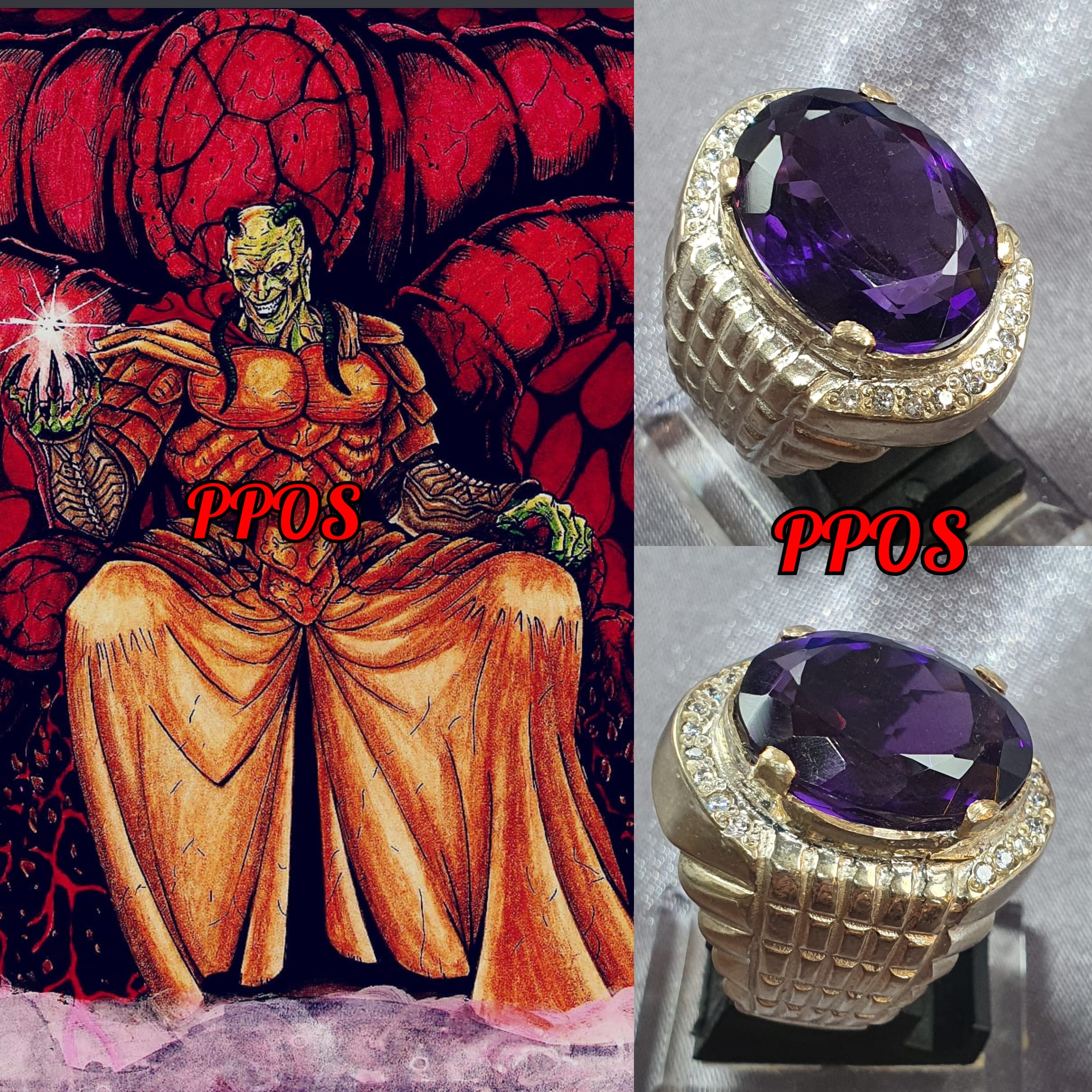 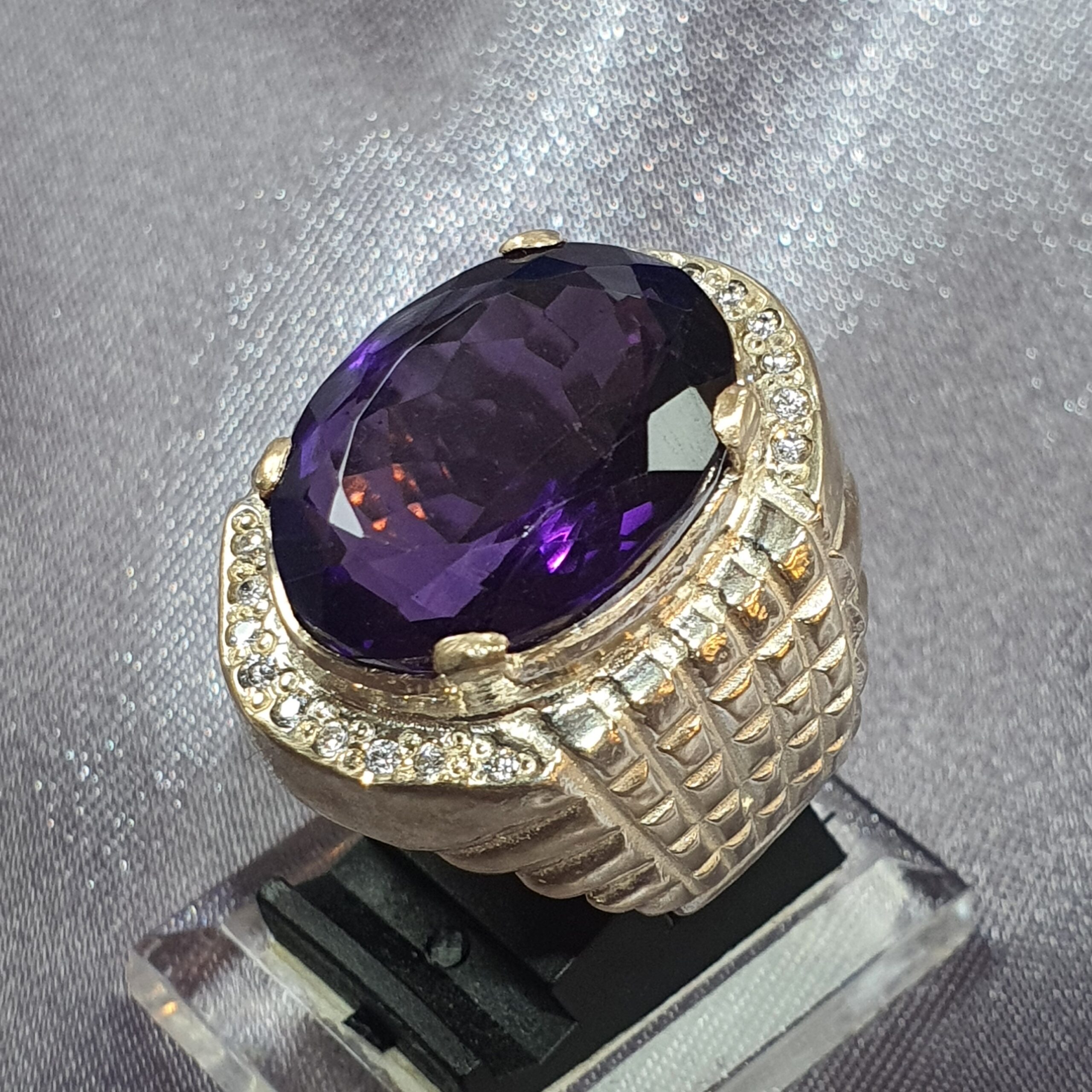 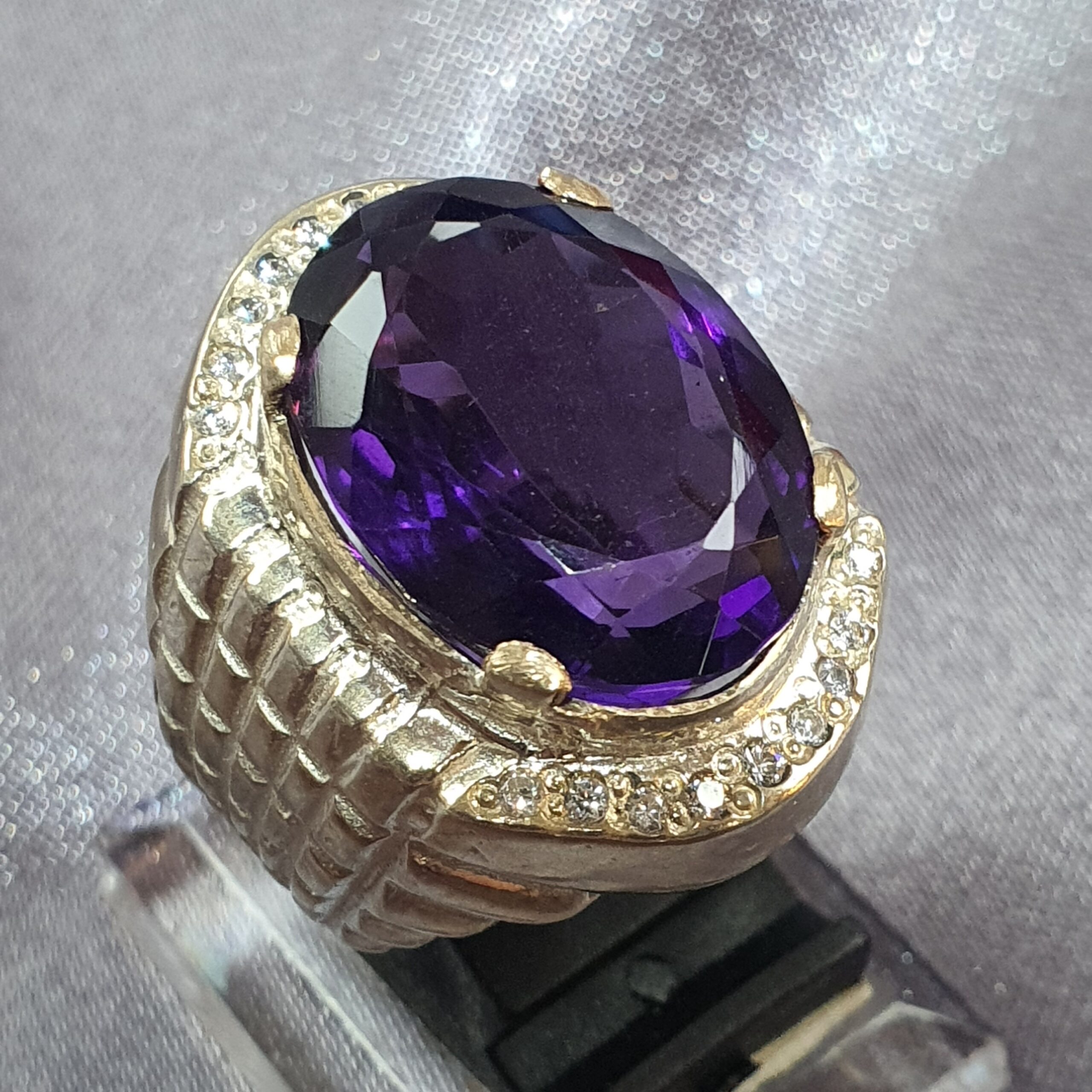 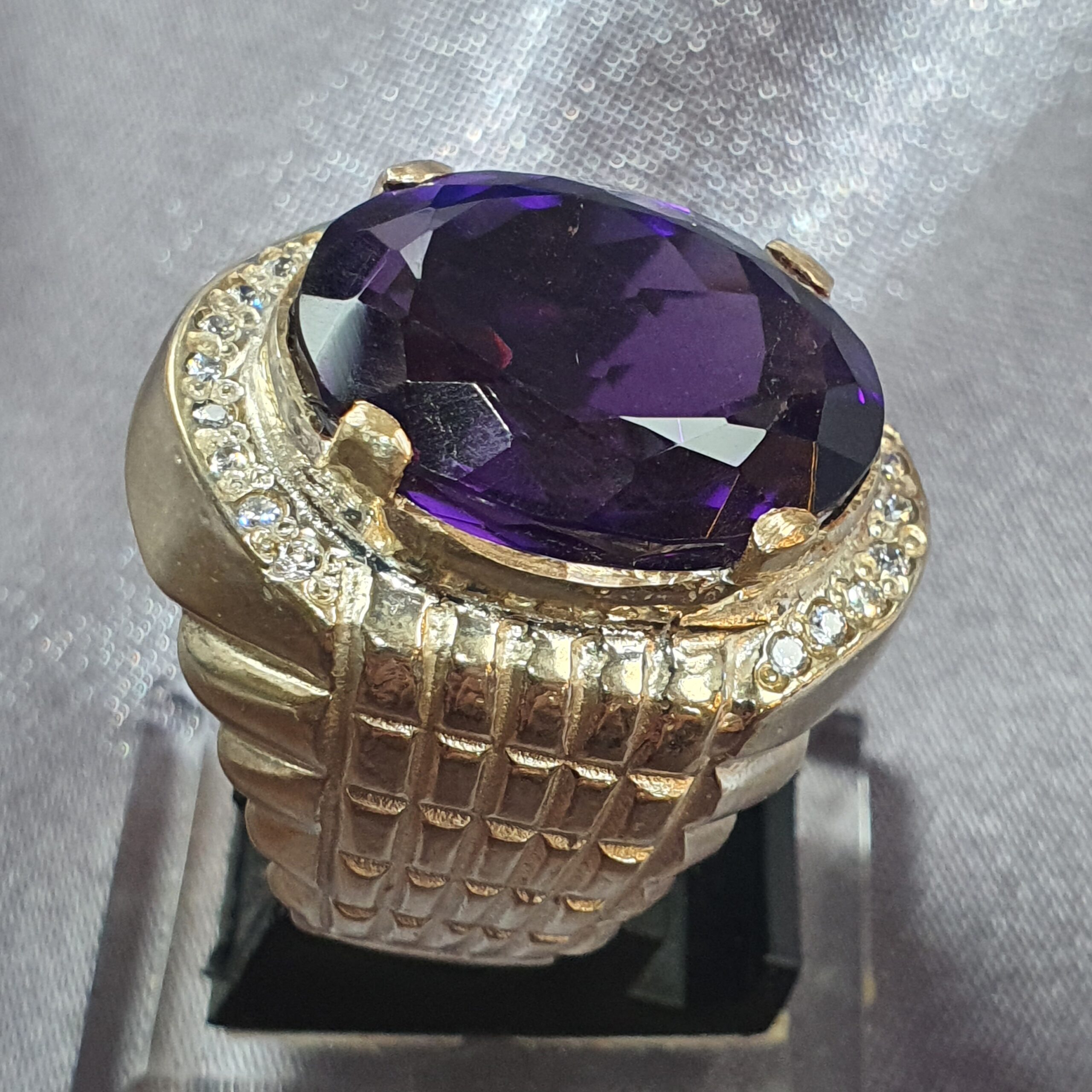 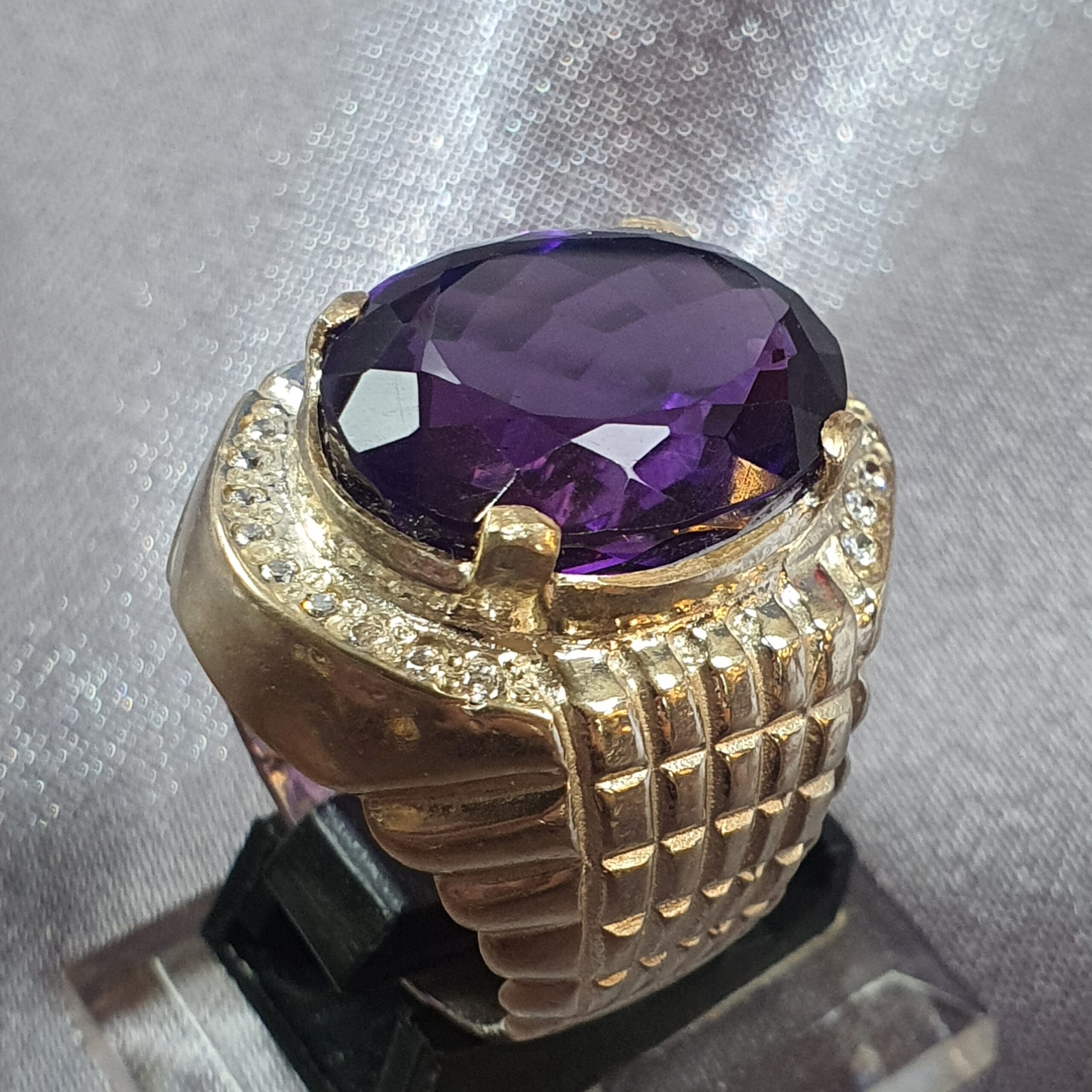 Good Morning to all Dear Brothers and Sisters.

I have a most intriguing Khodamic Ring to introduce to all of you today. The Main Vessel of Choice is a 50 Carat Oval Deep Purple Amethyst Gemstone. The Gemstones country of Origin is Brazil and Brazillian Amethysts are believed to be some of the most highest quality Amethysts to be found with very Deep Luxurious Colours.

The Khodam I wish to introduce to you is nothing but intriguing to say the least. Such a Khodamic Entity would make one wonder what life can be like.

I shall nickname this Khodam The Boss.

I call him the Boss because this Afrait is simply one. He is believed to effortlessly order around all manner of the Jinn to do his bidding obediently and without questions.

The Boss is Believed to be an Abdul Almuluk which means to say a Holy King of all Kings.

By communicating with this Powerful Entity the Following information has been gathered.

He the Boss was believed to have been imprisoned by the Great King Solomon during his reign of Earth as he could not be easily subdued or controlled. He was lulled into a deep sleep by a Female Demon-Afrit otherwise known as a Shaitaneen on the command of King Solomon.

The Boss Abdul AlMuluk is known to have a commanding presence that is believed to be transferred to the Wearer or Keeper of his Khodamic Ring easily apon wearing it.

The Boss Afrait Abdul Almuluk requested most politely to let the Potential Owner of the Khodamic Ring know that he Treasures the Bonds of Family and to treat his like a Respected older of the Owners Family. Like a Father or a Grandfather Figure. If this is done he is believed to easily grant all manner of wishes and is known to make the life of the Wearer and Keeper of his Khodamic Ring super smooth sailing, prosperous and effortless.

He is believed to have promised such a Keeper or his Khodamic Ring all manners of Material Accomplishments, Spiritual Achievements and Magical Abilities.

This Khodamic Being that I’ve named the Boss is believed to be a most talented Teacher and Guide for the Right person.

Without Going into much details all I can give away is this, to be called the Boss of all must mean that that Entity is believed to be very powerful, very ancient in age and if such an Entity can Boss other Powerful Jinn around then it is certainly something to ponder about. This is no ordinary Afrait Being to say the least.

It is believed that King Solomon had imprisoned many powerful Beings when his rule came into being. He is believed to have done this as the Powers of The Beings he imprisoned was deemed to great to be safely controlled.

Abdul Almuluk the Boss is believed to be one such being.

On a personal observation, I have noted this Ring is capable of Great Things. It is upto the Potential Owner to Decide.

Amethyst is known to be the Gemstone of the Aquarius, one of the most powerful creative thinking signs in the Zodiac. This Gemstone to my observations opens up deep channels of Thought the moment it is slipped onto the Finger. You sense a Deeper understanding of all things within minutes of wearing this Khodamic Ring. Faint Voices were heard after a while that I believe were capable of telling secrets. More should be told to only the Owner.

A Khodamic Ring like this is not an everyday Occurrence. I’m impressed by the Sheer Power of the Boss. The name is most appropriate for a Being like him.

This Khodamic Ring is Priced at a Firm $500. If there are no suitable takers, it will be gladly acquired by myself.

I’d like to thank all you Brothers and Sisters for Reading this. God bless Us all who are good of heart.

This Write up is COPYRIGHTED by Phra Pirab Occult Specialist Pte Ltd on the 1st of November 2022 at 10:35hrs.