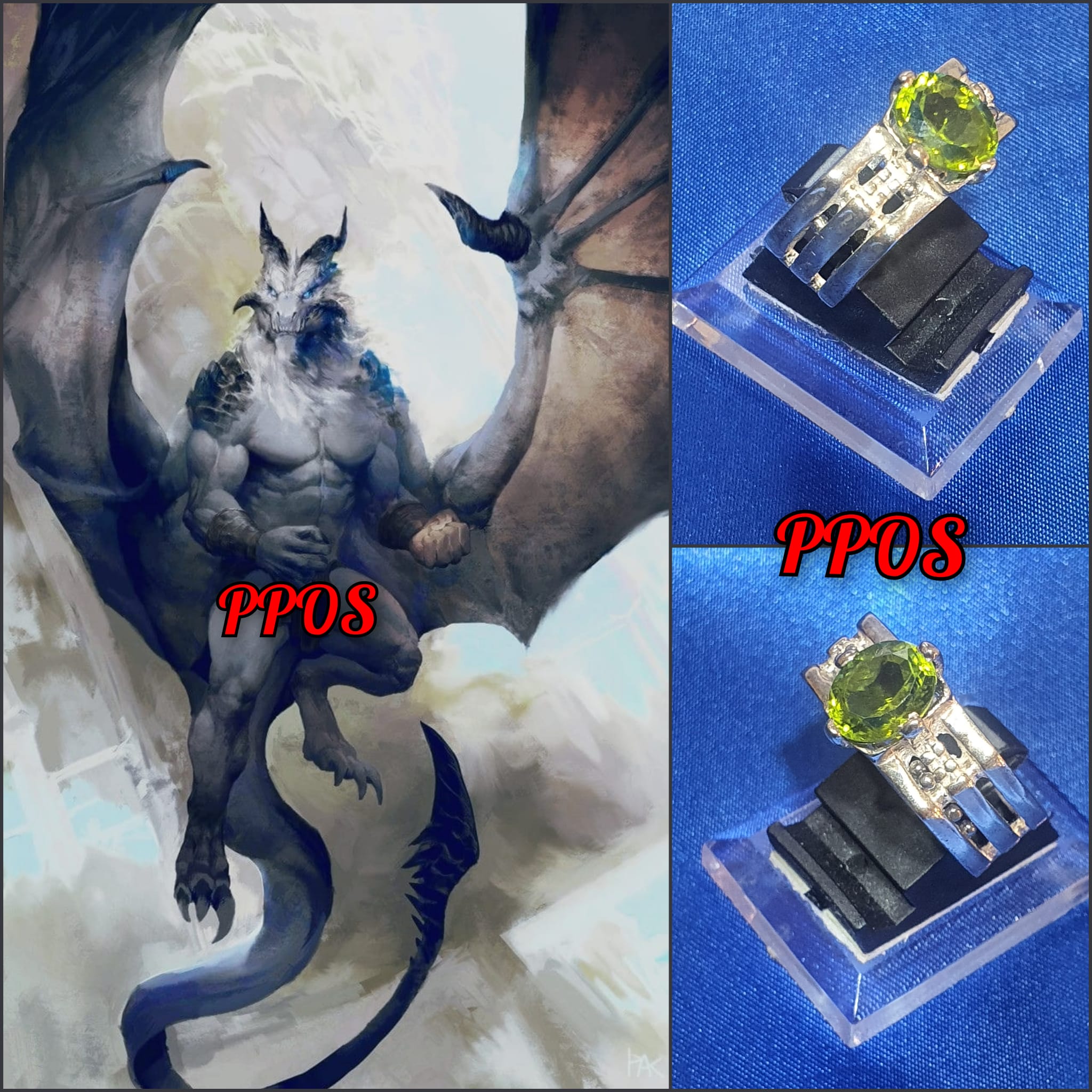 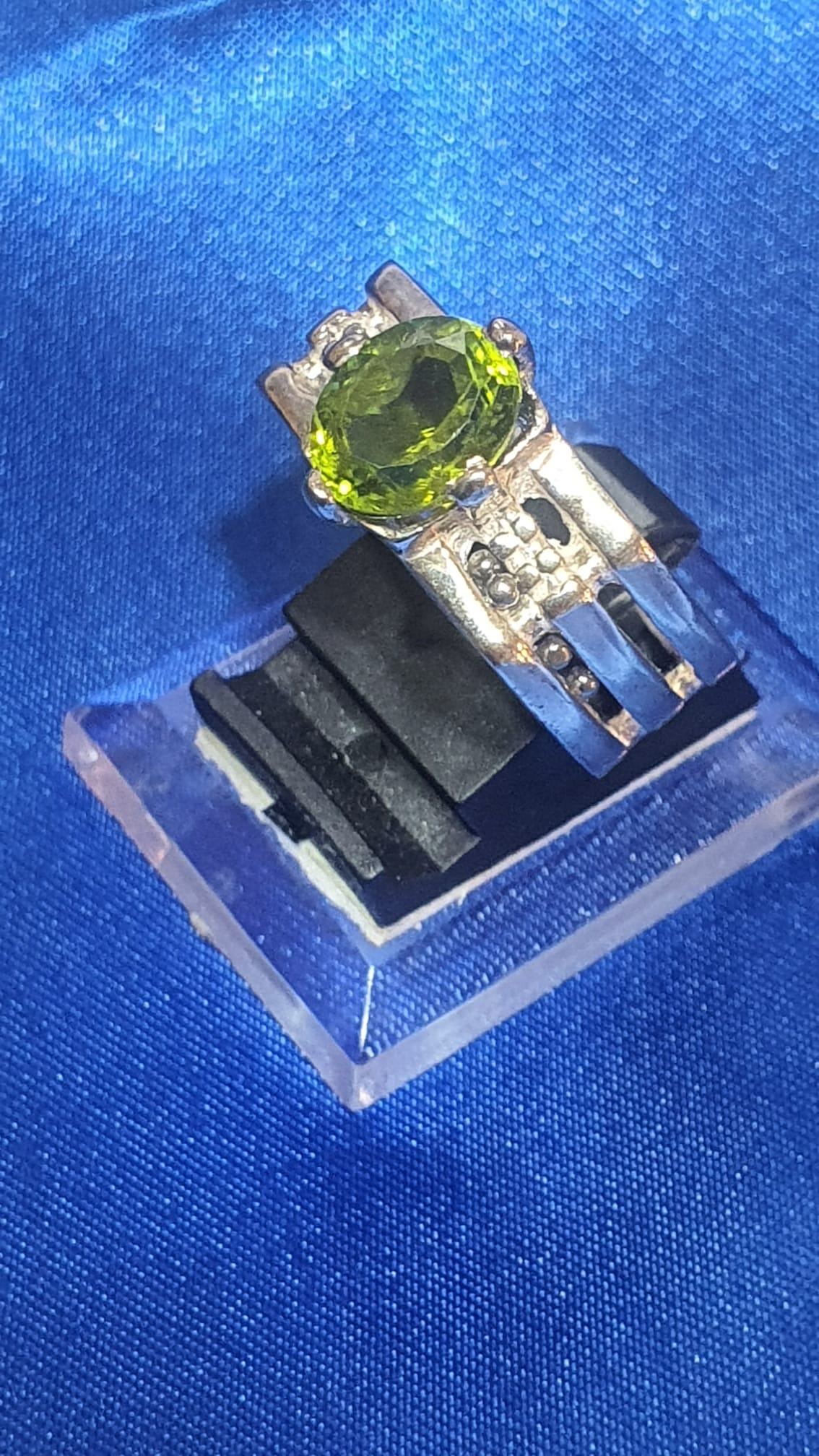 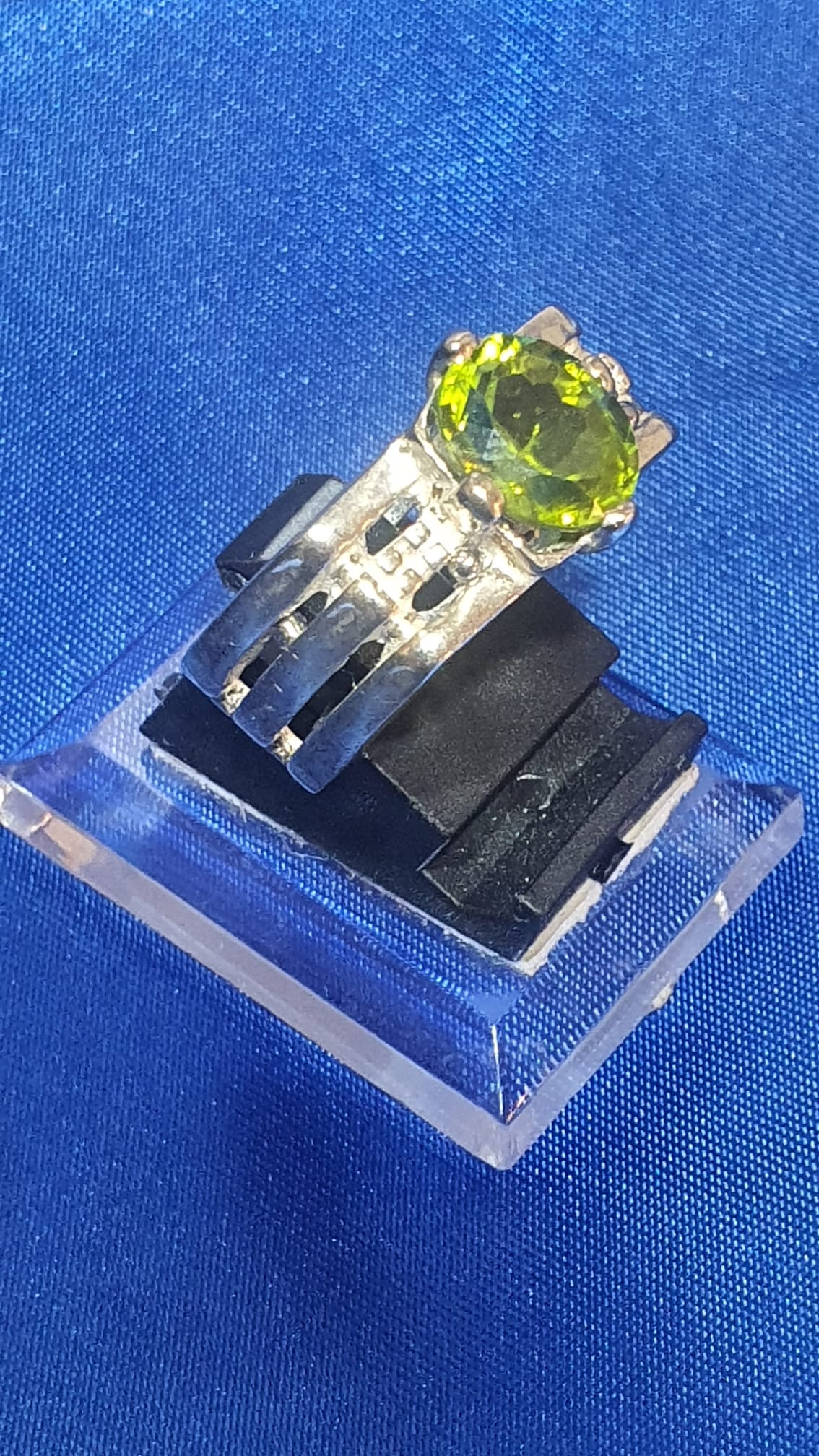 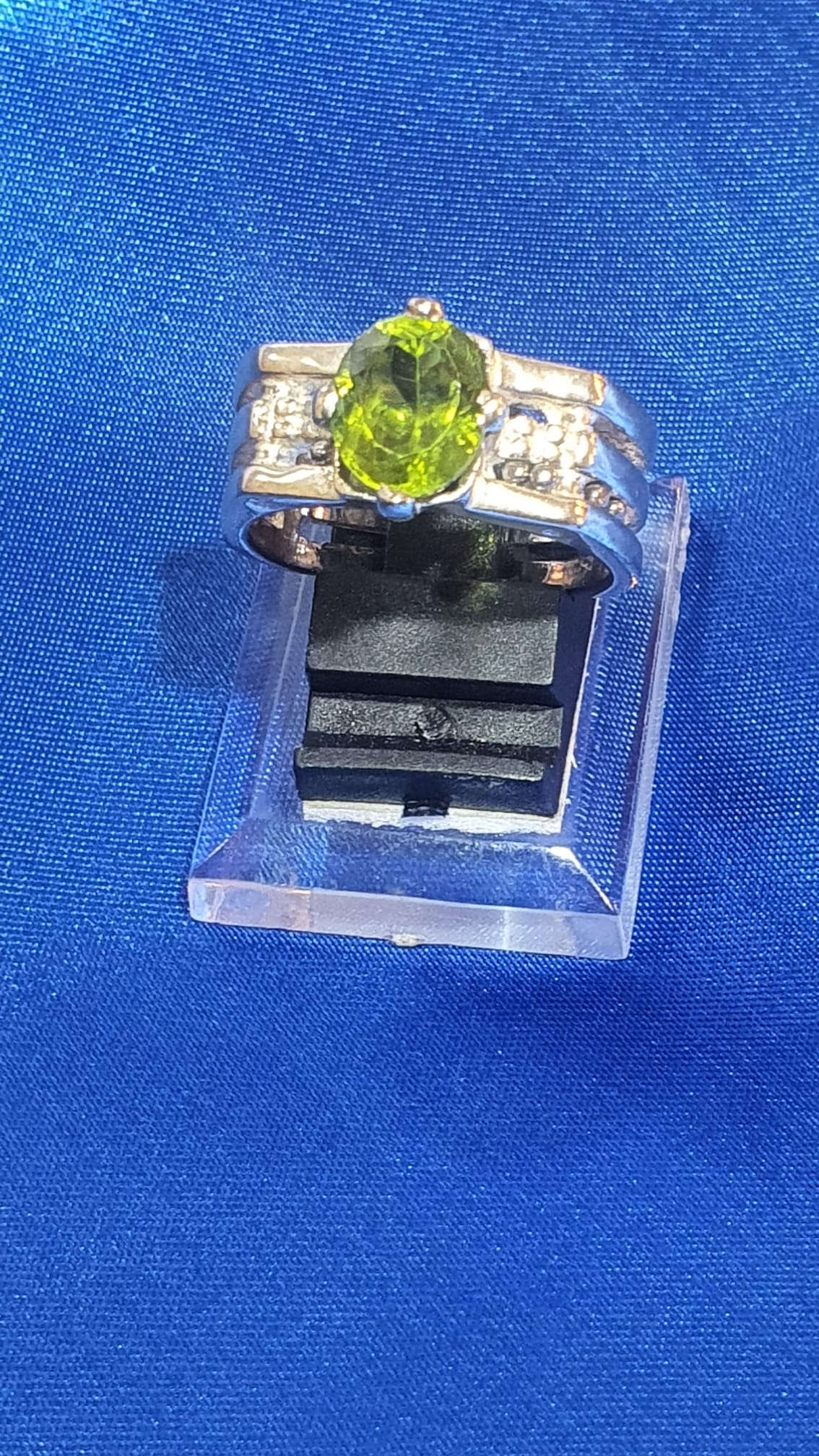 Good Afternoon to all my Dear Brothers and Sisters who follow my page. My Heartfelt thanks to all of you for your continued support.

This is my Last Green Dragon Peridot Khodamic Ring for the Year. And Fittingly it is believed to be the best I’ve had this whole year.

The Ring itself is handmade in 925 Silver, the Peridot is 4 carats in size, its is natural, unheated and untreated.

This Khodamic Ring is finely made in Silver with the Green Peridot situationed centrally smack dab in on the Ring.

The Design is very striking and bold to behold. This Silver Ring so strongly made in the latest design of twisted parallel lines. It is a pleasure to wear and very comfortable to put on.

This Afternoon I present to you the Final King Green Dragon Khodamic Ring for the Year 2022.

He is a Grand Magnificent and Majestic King of Kings.

Verily it is believed that He is Undisputed Kings to all the Majestic Male Dragon Khodams sold till date.

To say that this King loves Green would be stating the Obvious.

Like his Descendants and Contemporaries this King loves the Gemstone Peridot and he is strongly believed known to Bestow Great Riches to the Wearer alongside with the Intelligence to keep it, Grow it and expand on it.

This is none other than the Magnificent King Green Dragon Khodam Djinn.

I shall call him the King of Kings.

He is Truly a Giant to behold.

This King Green Dragon Khodam is actually believed to be among the oldest and most ancient of the Green Dragon Ifrit Khodams.

One who has be sire to several other Dragon Khodams throughout the centuries.

The Green Dragon Ifrits are known to be the Oldest amongst the various tribes of the Djinn.

They are all shapeshifters.

Their most favoured form is that of the Magnificent Spiritually endowed Dragons.

They are believed to choose the Colour Green to show their immense love for Mother Nature, all things natural , pure and blessed.

The King of Kings Green Dragon can and will shape-shift to assume the form of a Magnificent Winged Serpent as his namesake suggests.

This King of Kings Green Dragon is believed the earliest to assume the Form of the Great Flying Winged Serpent which we today know and call as the Dragon.

This King of Kings is believed to be a prime example of the Phase, With Great Power comes Great Responsibility, for it is believed that his Owner may command and control the race of Serpents, winged or otherwise.

It is believed no beings living may strike him or bring him to harm, he who Adorns this blessed Khodamic Ring.

Such is believed to be the Powerful Aura of this Gemstone.

These are some of the qualities that I believe will make our King of Kings Magnificent Green Dragon Khodam so highly sought after and treasured in the time to come.

The King of Kings Green Dragon Khodam is believed to be very Powerful in all Matters Mystical and His Knowledge of Sorcery and Arcane Secret Rituals in unsurpassed.

He is known to communicate by telepathic means Hidden Occultic Knowledge on secret and mystical matters and bestow them onto the Wearer of the Ring every no moons night.

The Wearer is believed to come into such Knowledge automatically and possess this Knowledge after awaking from Sleep the Morning after. The Wearer is advised to wear this Khodamic Ring of the King of Kings daily and not remove it from his person for this transference of knowledge to occur.

This is certainly a most special gift and i expected nothing less from a Khodam that is the King of Kings to the race of the Green Dragons.

Here I would be remiss if I didn’t repeat as to why people often wonder why Powerful Khodamic Beings like the Green Dragon are paired with the Khodamic Vessel of the Gemstone Peridots,

The Gemstone Peridots are chosen as they are believed to represent Money and Wealth.

Choosing an appropriate Vessel for the Green Dragon Khodam would only enhance the qualities and attributes that is believed to be passed over onto the Owner.

And as Such we did luck out with such a Powerful King of Kings Green Dragon Khodam.

This Khodam the King of Kings Green Dragon Khodam is Undisputed Father King to the race of the Green Dragon Khodamic Beings who are known to be so gigantic that they are believed to fill the entire Sky with their inspiring Forms.

He is the Undisputed King to them all.

None living have actually witnessed this King’s Dragon Form though I am led to believe that for those who have the gift peternatural vision may be able to behold a Green Dragon of such staggering proportions that even the Heavens may fail to accommodate such giant Size, in their visions.

To Summarise briefly, this King of Kings Green Dragon Khodam may assume any shape and Form and communicate directly with the Wearer of his Khodamic Ring.

The Wearer is believed to gain supernatural knowledge and Wisdom, come into great material abundance and lack for nothing in this earth be it material things or spiritual abilities.

The King is known to appear in the Wearer’s dreams giving hints, visions to things to be, whisper knowledge about people they may come into contact with softly into their ears softly foretelling of things that will come to be so that the Wearer may benefit and learn from all of this just like the Queen Mother whom was sold a few months ago.

This King of Kings goes without saying is believed to attract Wealth, Good Fortune, Prosperity, Great Abundance and Material Comforts from all the Corners of the Earth towards the Wearer and provide with the Opportunities and Wisdom to benefit from them.

The King of Kings Green Dragon Khodam is Pure Force of Nature to be reckoned with.

He is believed to have has no equal in the Khodamic World,

He is unrestrained and ferocious, unrepressed Power in motion.

This is a Life Changing Khodamic Ring and I do not use this world lightly.

For those who have “Vision” may see.

I hope it will go to a most deserving person and i wish them well for this is the last Green Dragon for this Year and probably the next as well.

The Owner should be Brave ready for tremendous changes in his or her life.

They should be ready to have their nature change and accept that they may grow wiser, more powerful and influential as it is believed that they be able to easily see though human emotions.

Be prepared to have your whole life should this Khodamic Ring of the King of Kings Green Dragon come into yr hands.

If there are no sincere takers we will gladly add this to our own collection.

Thank you for reading my dear friends.

This Write up is COPYRIGHTED by Phra Pirab Occult Specialist Pte Ltd on 6th October 2022 at 14:22hrs.

We are located at Block 34 Whampoa West #01-33 (330034)
Boon Keng MRT Exit B, Once u come out the MRT Escalator turn back, behind the MRT Toilet you can see Blk 34, the first shop you will see is a Boon Tong Kee restaurant, just follow the long corridor and walk down u will see our shop as we after in the middle.